The top United Nations peacekeeping official today stressed the need to boost the mission in the Democratic Republic of the Congo (DRC) to facilitate the next phase of elections in the vast, impoverished country and protect civilians in areas where national authorities are not present.

During a press briefing at UN Headquarters in New York, Hervé Ladsous, Under-Secretary-General for Peacekeeping Operations, emphasized that the UN Organization Stabilization Mission in DRC (MONUSCO) must continue to work with Congolese authorities, especially to ensure that future elections can be carried out more smoothly.

Millions of Congolese went to the polls on 28 November last year to cast votes in presidential and parliamentary elections. Since then, there has been a tense political climate in the country and several outbreaks of violence, and the UN has repeatedly called for the peaceful settlement of electoral disputes.

MONUSCO provided technical and logistical support to the organization of the polls – the second time since independence from Belgium in 1960 that the country has held multi-party elections.

Mr. Ladsous acknowledged that the circumstances under which elections were held were challenging, and underlined the need for MONUSCO to continue working closely with Congolese authorities to prepare for the next phase of elections – provincial and local – so that they “satisfy the Congolese political actors, contribute to dialogue and the opening of the political space.”

He also highlighted the role of MONUSCO in protecting civilians in the eastern part of the country, where many communities are in remote areas and national forces are sometimes not present.

During his briefing, Mr. Ladsous also discussed the situation in Sudan and South Sudan and stressed that the situation between the neighbouring States continues to be tense. Border disputes, the sharing of oil revenue and mutual accusations of supporting armed groups are some of the issues that he noted were still huge challenges. He reiterated that the UN would continue its work through its three peacekeeping missions in the region.

Mr. Ladsous also noted that there is a window of opportunity for the international community to help further the political process in Somalia, as the militant group known as Al Shabaab has been driven out of Mogadishu, the capital.

In addition to briefing on current missions, Mr. Ladsous spotlighted his concern for ensuring the safety of peacekeepers worldwide, and said it is one of his priorities this year to improve the security conditions in which they work. 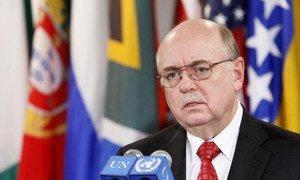 The top United Nations envoy in the Democratic Republic of the Congo (DRC) today stressed the need for all parties to use legal means and dialogue to settle differences in the aftermath of recent elections so as to advance stability and peace in the country.