8 February 2012
The United Nations and the League of Arab States are considering sending a joint observer mission to Syria to try to end the crisis engulfing the Middle East country, with Secretary-General Ban Ki-moon warning today that recent attacks against civilians in the city of Homs were “a grim harbinger of worse to come.”

Mr. Ban briefed the Security Council this afternoon on the latest developments in Syria, where well over 5,000 people have been killed as a result of a Government crackdown since a pro-democracy uprising began in March last year.

“For too many months, we have watched this crisis deepen,” Mr. Ban told journalists at UN Headquarters following the closed-door Council briefing. “We have seen escalating violence, brutal crackdowns and tremendous suffering by the Syrian people.”

He said the Council’s failure to agree on collective action regarding Syria – last Saturday, Russia and China vetoed a draft resolution supported by the Council’s 13 other members – was deeply regrettable. The draft text had endorsed an Arab League plan to resolve the crisis.

“The failure to do so is disastrous for the people of Syria. It has encouraged the Syrian Government to step up its war on its own people. Thousands have been killed in cold blood… I fear that the appalling brutality we are witnessing in Homs, with heavy weapons firing into civilian neighbourhoods, is a grim harbinger of worse to come.”

The Secretary-General asked: “How many deaths will it take to halt this dangerous slide toward civil war and sectarian strife?”

Mr. Ban spoke yesterday with Nabil al-Araby, Secretary-General of the Arab League, about how to end the killings and start political negotiations between the Government of President Bashar al-Assad and the opposition.

“He informed me that he intends to send the Arab League observer mission back to Syria and asked for UN help. He further suggested that we consider a joint observer mission in Syria, including a joint special envoy.

“I briefed the Security Council. Many members expressed their views about the proposal. In the coming days, we will further consult the Council before fleshing out details. We stand ready to assist in any way that will contribute towards improvement on the ground and to the overall situation.”

Earlier, the UN High Commissioner for Human Rights Navi Pillay urged the international community to protect civilians in Syria, saying the Security Council’s failure to agree on collective action seems to have “fuelled the Government’s readiness to massacre its own people in an effort to crush dissent.”

According to local sources, as well as independent media reports from inside Homs, the Syrian army has sharply increased the use of tanks, helicopters, mortars, rockets and artillery fire to attack civilian areas, the Office of the High Commissioner for Human Rights (OHCHR) said.

“I am appalled by the Syrian Government’s wilful assault on Homs, and its use of artillery and other heavy weaponry in what appear to be indiscriminate attacks on civilian areas in the city,” said Ms. Pillay.

She stressed the “extreme urgency for the international community to cut through the politics and take effective action to protect the Syrian population.”

The assault on Homs is the latest move in the ongoing crackdown against a popular uprising that emerged early last year as part of the wider reform movement across North Africa and the Middle East that is known as the Arab Spring.

The High Commissioner said that in the past 11 months, thousands of Syrian protesters and civilians have been killed, injured, detained, tortured and forcibly disappeared.

“All evidence points to the involvement of the Syrian army and security forces in the perpetration of most of these crimes,” stated Ms. Pillay. “In light of their nature and scale, they may constitute crimes against humanity, punishable under international law.

“Those in command should, however, remember that there is no statute of limitations for serious international crimes, and there will be a sustained effort for as long as it takes to bring justice to all those who have been victims of the gross and systematic crimes taking place in Syria today.”

“The virtual carte blanche now granted to the Syrian Government betrays the spirit and the word of this unanimous decision. It is depriving the population of the protection they so urgently need,” she stated.

An OHCHR fact-finding mission and an independent Commission of Inquiry that investigated the violations in Syria concluded that crimes against humanity may have been committed since March last year. The High Commissioner had on several occasions last year encouraged the Security Council to refer the situation in Syria to the International Criminal Court (ICC). 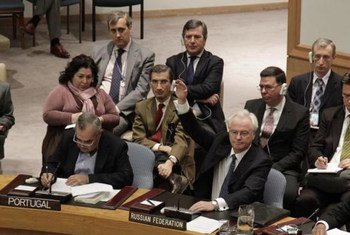 4 February 2012
Secretary-General Ban Ki-moon voiced deep regret after Security Council members were today unable to agree on a resolution backing an Arab League plan to resolve the crisis in Syria, where thousands of people have been killed over the past year since authorities crackdown on a pro-democracy uprising.