According to a report prepared by the World Food Programme (WFP) and the Food and Agriculture Organization (FAO), food shortages have worsened, with the number of South Sudanese without enough to eat rising from 3.3 million last year to 4.7 million currently.

An estimated one million of those affected are facing severe food shortages, compared to 900,000 last year, according to the report, which is based on the findings of a joint assessment mission that carried out surveys in South Sudan between October and November at the request of the country’s Ministry of Agriculture and Forestry.

It projects that the number of people who are severely food-insecure could double if conflicts continue to cause major population displacements and food prices keep rising.

Poor harvests, increased demand, rapidly rising prices, conflict, displacement and a large number of returnees have contributed to the food shortages, with a shortfall in cereal production weighing heavily on already distressed communities.

“This is a rapidly approaching crisis that the world cannot afford to ignore,” said Chris Nikoi, WFP’s country director in South Sudan. “The situation is dire, and we are doing everything we can to be ready, but we are running out of time.”

George Okeh, head of the FAO office in South Sudan, stressed the need to enable households to have quick access to nutritious food and other basic necessities.

“In order to restore and sustain food and nutrition security in South Sudan, we need to break the cycle of increasing hunger and poverty. We can do this by helping people to resume the farming, livestock and other activities that support their livelihoods.”

According to the WFP-FAO assessment, South Sudan’s national cereal production last year was about 19 per cent below the previous year, and 25 per cent lower than average harvests over the past five years. The cereal deficit this year is estimated at more than 470,000 tons – almost half the country’s total annual consumption requirements.

Poor rainfall in the early season was largely responsible for the lower harvest, with ongoing conflict compounding the problem by disrupting normal agricultural activities.

The closure of border crossings between South Sudan and Sudan has also led to disruption of the usual supply of food to markets in South Sudan.

WFP’s emergency operation this year aims to reach some 2.7 million vulnerable people with 150,000 tons of food, and is seeking more donor support to cover a $160 million funding shortfall.

FAO is to provide agricultural support to revive production capacity for the next cropping season that starts with the onset of the rainy season in April, and the Government has requested the agency to include in its projects a cash transfer programme to enable families to buy food locally while building their own assets.

The agency is seeking $23 million in donor support through the UN Consolidated Appeal Process for South Sudan.

In a related development, Secretary-General Ban Ki-moon today said that the UN has been monitoring the situation in Jonglei state, which has been in the maelstrom of bloody inter-ethnic conflict in recent months, with grave concern.

He told reporters in New York that the UN peacekeeping mission in South Sudan (UNMISS) will continue to support efforts to protect civilians and urged the international community to provide the required assets, particularly helicopters and other air transport capabilities.

“I am also deeply concerned about the lack of progress in negotiations on post-independence issues,” Mr. Ban said of the strained relations between Sudan and South Sudan since the south became a separate State last July.

“The unilateral decisions taken by both governments over their oil dispute, and their increasingly hostile rhetoric, could easily escalate militarily,” said the Secretary-General.

He noted that the breakdown in trust had hampered the delivery of relief to those in need, exacerbated food insecurity, created a refugee crisis and affected the possible return to South Sudan of 500,000 people from Sudan.

He urged both sides to commit themselves to reaching agreement on all outstanding issues when talks resume in the Ethiopian capital, Addis Ababa, on Friday.

“The moment has come for both heads of State to display once again the leadership that brought them to amicably agree on the secession – and to make the necessary compromise that will guarantee a peaceful and prosperous future for both nations,” Mr. Ban added. 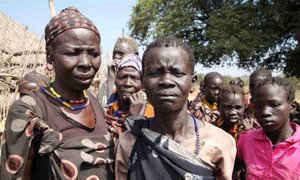 The United Nations relief chief today underlined the enormity of the humanitarian challenges facing South Sudan on the first day of her three-day visit to the fledgling country, highlighting the needs of returnees, an influx of refugees, internal displacement as a result of ethnic conflict and endemic poverty.