1 February 2012
The United Nations relief chief today underlined the enormity of the humanitarian challenges facing South Sudan on the first day of her three-day visit to the fledgling country, highlighting the needs of returnees, an influx of refugees, internal displacement as a result of ethnic conflict and endemic poverty.

“South Sudan faces significant challenges, including hundreds of thousands of people displaced in 2011, people returning from Sudan and refugees from the ongoing conflict in Southern Kordofan and Blue Nile states in Sudan,” said Valerie Amos, the Under-Secretary-General for Humanitarian Affairs.

“In addition, conflict, poverty, and increasing food insecurity are having a major humanitarian impact. The people of South Sudan need our support,” said Ms. Amos, who is also the UN Emergency Relief Coordinator, when she met with met with representatives from aid agencies in Juba, the capital.

A relatively small number of aid organizations are dealing with about 30 simultaneous emergency operations in the vast and remote country prone to inter-ethnic conflict and insecurity. Aid workers briefed Ms. Amos on their efforts to distribute aid in Jonglei state, the scene of inter-communal clashes in late December and early last month.

“I am concerned about the scope and magnitude of the violence communities have inflicted on each other in Jonglei, as well as about the conflict between rebel militias and the army that has killed, wounded and displaced so many,” said Ms. Amos.

“Diversity in South Sudan should be a source of both communal and national pride. I hope that everyone in South Sudan will embrace their identity as South Sudanese, and achieve long-term reconciliation and peace,” she added.

She will tomorrow travel to Jonglei to see the ongoing aid operation and meet with Government officials, relief workers and those affected by the recent violence. On Friday, Ms. Amos is scheduled to meet with South Sudanese President Salva Kiir and other senior officials.

Meanwhile, the UN Mission in South Sudan (UNMISS) has reported that it facilitated and accompanied a Government mission to the Bulich area of Tonj East county in Warrap state, which confirmed that 78 people were killed and 68 others were wounded during an attack by an armed group from neighbouring Unity state on Monday.

Nine people are missing and thousands are reported to have been displaced, the Secretary-General’s spokesperson told reporters in New York. The UNMISS team saw 15 bodies that had not been buried.

Humanitarian agencies plan to call an emergency meeting to organize a coordinated response to the needs of those affected by the violence in Warrap, while the UNMISS human rights division will investigate the incident. 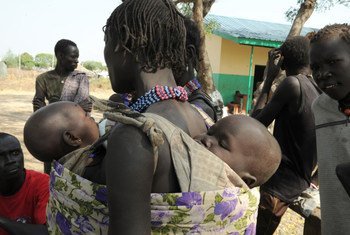 UN scales up food assistance for more than 80,000 people in South Sudan

31 January 2012
The United Nations World Food Programme announced today that it will scale up its assistance to reach 80,000 people affected by the recent escalation of ethnic violence in South Sudan’s Jonglei state.