UN Photo/S. Price
Burundi troops serving with African Union in Somalia in new positions in Deynile on the northernmost outskirts of Mogadishu.

6 February 2012
The international group that brings together the United Nations and its diplomatic partners in support of efforts to restore peace and stability in Somalia insisted today that the country’s current transitional governing arrangements must end on 20 August this year, as stipulated in recent agreements, and called for a new draft constitution by mid-April.

At the end of a two-day meeting in Djibouti, the International Contact Group on Somalia (ICG) said that the a new constitution will pave the way for the establishment of a new, smaller and more representative parliament and elections for the positions of Speaker, his or her deputies, and the President.

The ICG also underlined the need to broaden consultations with civil society and other interested parties in Somalia to ensure that future political decisions have the widest possible support.

Somalia’s Transitional Federal Institutions (TFIs) are in the process of implementing a roadmap agreed in September and which spells out priority measures to be carried out before the interim administrative arrangements end in August.

The ICG praised the recent military successes by the African Union Mission in Somalia (AMISOM), forces of the Transitional Federal Government (TFG) and their partners against fighters of the militant group known at Al Shabaab.

The Group stressed that enhancing the capability of AMISOM would lead to further security improvements and enable the TFG to extend its authority and reach out to the population in area newly seized from Al Shabaab.

“The Group acknowledged that this would require adequate, sustainable and predictable funding, including for an expanded logistical support package, and called for uncaveated contributions to the AMISOM Trust Fund, including from potential new donors, and for additional troop contributors,” said the final communiqué issued at the end of the 21st meeting of the ICG.

It also called for urgent strengthening of the capacity of the TFG security forces, and noted the importance of establishing functional local administration and stabilisation programmes in areas recovered from Al Shabaab.

The ICG welcomed the planned London Conference on 23 February as an opportunity to focus additional attention at the highest level on stabilizing Somalia.

“As we approach the end of transition and a hoped-for new era of peace and economic recovery in Somalia, the ICG is committed to becoming even more effective at representing and coordinating the international community’s response,” according to the communiqué.

It welcomed the “bold relocation” of the UN Political Office for Somalia (UNPOS) from the Kenyan capital, Nairobi, to Somalia’s capital Mogadishu, saying it looked forward to the shifting of other UN agencies and international partners to Somalia.

The meeting in Djibouti was attended by representatives of the United Nations and 40 countries and regional or international organizations. 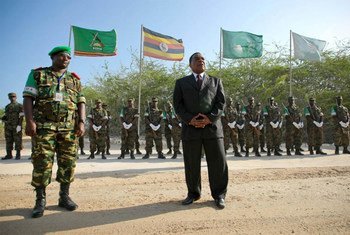 26 January 2012
The re-establishment of the United Nations political presence in Mogadishu will allow the world body to work more closely with Somalia during a crucial period in its peace process, the UN envoy to the country said today.