6 February 2012
Secretary-General Ban Ki-moon today renewed his call for progress in the Middle East peace process, citing the toll taken on the economy and lives of the Palestinians by the ongoing Israeli occupation.

“Economic progress cannot be reached and sustained absent a credible political solution on the horizon,” Mr. Ban told participants at the UN Seminar on Assistance to the Palestinian People, which is taking place in Cairo and organized by the General Assembly’s Committee on the Exercise of the Inalienable Rights of the Palestinian People.

Mr. Ban got a first-hand look at the situation on the ground and challenges on the road to peace during his trip to the region last week that included stops in Israel and the occupied Palestinian territory.

“During my visit, I clearly saw the high economic cost of the Israeli occupation of the Palestinian territory. I reiterated my long-standing call for an end to the occupation that began in 1967 and an end to the conflict,” he said in his message, which was delivered by Deputy UN Special Coordinator for the Middle East Peace Process Maxwell Gaylard, who is also Humanitarian Coordinator for the occupied Palestinian territory.

“The issue of settlements, which are illegal and hurt prospects for a negotiated solution, clearly has an economic dimension. Settlements and their infrastructure severely restrict access to land and natural resources by the Palestinian people,” he said.

This is further compounded by settler violence, he said, adding that Israeli restrictions on free movement remain another vast impediment to Palestinian economic viability in the West Bank.

“This situation is unacceptable,” stated Mr. Ban. “As I said during my visit, notwithstanding Israeli steps to facilitate economic growth, occupation measures which stifle Palestinian life must be rolled back.”

This is especially important, he noted, as the Palestinian Authority has built the institutions essential for a functioning democracy and a future Palestinian State.

“Now is the time to build on that progress. Israel can make a critical contribution to consolidating these achievements, preparing the ground for a negotiated, two-State solution.”

The Secretary-General also voiced concern about the “fragile” financial situation of the Palestinian Authority, warning that continued shortfalls could challenge the “impressive” progress in institution-building. He called on donors to deliver their 2012 contributions to the Authority as soon as possible.

He also called once again for immediate action on the closure of the Gaza Strip, stressing that the full opening of legitimate crossings for the import of construction materials is critical for Gaza’s economic recovery, and would enable badly needed reconstruction activities.

“Exports, a critical component of any economy, should be allowed to resume at scale, including transfers to the West Bank and Israel,” he stated. “All these policy changes can be implemented with due consideration for Israel’s legitimate security concerns, while making a significant difference in the lives of many ordinary Gazans.”

Mr. Ban voiced the hope that the direct talks begun last month between Israeli and Palestinian negotiators will soon lead to substantive negotiations aimed at reaching an agreement for a two-State solution by the end of this year, as envisaged by the Middle East Quartet – the diplomatic grouping consisting of the UN, European Union, United States and Russia.

“Both Israeli and Palestinian leaders must show the vision, courage and determination necessary to overcome the current mistrust and reach an historic peace agreement that meets the legitimate aspirations of both sides,” said the Secretary-General.

“A two-State solution is long overdue. The status quo is unacceptable; it only guarantees continued conflict and suffering.

In a related development, Mr. Ban today spoke by telephone with President Mahmoud Abbas of the Palestinian Authority and voiced hope that he will remain engaged in the dialogue facilitated by King Abdullah II of Jordan in an effort to resolve the Middle East conflict.

Discussions also touched on unity talks between Mr. Abbas and the leader of Hamas, Khaled Meshaal, in Qatar and the formation of a new Palestinian unity government.

“The Secretary-General emphasized that the United Nations has consistently supported Palestinian reconciliation within the framework of the PLO [Palestine Liberation Organization] principles and under the leadership of President Abbas,” said a statement issued by Mr. Ban’s spokesperson.

Mr. Ban pointed out that the two tracks – Palestinian reconciliation and negotiations with Israel – should not be seen as contradictory and mutually exclusive.

Media reports earlier today indicated that Mr. Abbas would lead a Palestinian unity government following a meeting in Doha with Mr. Meshaal. The new interim administration would then make arrangements for elections in the West Bank and Gaza Strip, according to the reports. 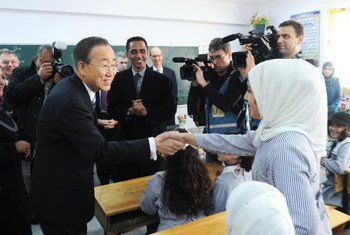 2 February 2012
Secretary-General Ban Ki-moon travelled today to the Gaza Strip, where he underlined his commitment to continue working for peace and stability in the Middle East, and voiced his concern about the need to increase humanitarian assistance for Palestinians.