UN Photo/Sophia Paris
A man employed through the "Cash for Work" programme clears rubble from the streets of Carrefour-Feuilles, Haiti.
23 January 2012

According to the report entitled ‘Global Employment Trends 2012: Preventing a deeper jobs crisis,’ the world faces the additional challenge of creating decent jobs for the estimated 900 million workers who subsist on less than $2 a day, most of them in developing countries.

“After three years of continuous crisis conditions in global labour markets and against the prospect of a further deterioration of economic activity, there is a backlog of global unemployment of 200 million,” according to the report. More than 400 million new jobs will be needed over the next 10 years to absorb a labour force expansion of an estimated 40 million people.

“Despite strenuous government efforts, the jobs crisis continues unabated, with one in three workers worldwide – or an estimated 1.1 billion people – either unemployed or living in poverty,” said Juan Somavia, the ILO Director-General. “What is needed is that job creation in the real economy must become our number one priority,” he said.

The economic recovery that started in 2009 was short-lived, according to the report, which notes that there are still 27 million more unemployed workers than at the start of the crisis.

The fact that economies are not generating enough employment is reflected in the employment-to-population ratio (the proportion of the working-age population in employment), which suffered the largest decline on record between 2007, when it was 61.2 per cent, and 2010, when it fell to 60.2 per cent, according to the report.

There are nearly 29 million fewer people in the labour force now than would be expected based on pre-crisis trends. If these “discouraged workers” were counted as unemployed, then global unemployment would swell from the current 197 million to 225 million, and the unemployment rate would rise from 6 per cent to 6.9 per cent.

The report presents three scenarios on the employment situation in the future.

The baseline projection shows an additional 3 million unemployed for 2012, rising to 206 million by 2016. In the second scenario, if global economic growth rates fall below 2 per cent, then unemployment would rise to 204 million in 2012.

The better scenario assumes that there will be a quick resolution of the euro zone debt crisis, which would lead to global unemployment dropping by one million this year.

Some 74.8 million young people between the ages of 15 and 24 were unemployed last year, an increase of more than 4 million since 2007, according to the report. Young people are nearly three times as likely as adults to be unemployed. The global youth unemployment rate, at 12.7 per cent, remains a full percentage point above the pre-crisis level. 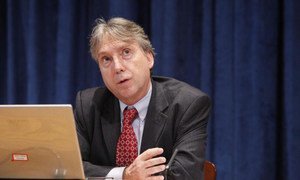 Countries throughout the world will experience an economic slowdown this year as the sovereign debt crisis in Europe continues to unfold, according to a United Nations report launched today that also warns that governments must urgently address high unemployment rates, particularly among youth.