17 January 2012
Countries throughout the world will experience an economic slowdown this year as the sovereign debt crisis in Europe continues to unfold, according to a United Nations report launched today that also warns that governments must urgently address high unemployment rates, particularly among youth.

The World Economic Situation and Prospects 2012 (WESP) report gives a detailed picture on seven geographical regions and forecasts that growth rates for the next two years will slow down in most of them, with the exception of the African continent, which will continue to enjoy growth due to stable commodity prices and foreign investment.

The report, released by the UN Department of Economic and Social Affairs (DESA), points to the European sovereign debt crisis that erupted in Greece last May as a major shock to the global economy, whose multiple negative effects will continue to reverberate around the world.

“Failure of policymakers, especially those in Europe and the United States, to address the jobs crisis and prevent sovereign debt distress and financial sector fragility from escalating poses the most acute risk for the global economy in the outlook for 2012-2013,” the report states.

The report estimates that growth in the European Union (EU) is expected to be only 0.7 per cent in 2012, substantially lower than the 1.6 per cent growth registered last year. In addition, unemployment throughout the continent will remain near 10 per cent in the euro area, having changed very little since September 2009.

Africa is expected to continue to grow, defying the global trend. The continent is forecast to see an increase in its overall growth from 2.7 per cent in 2011 to 5 per cent in 2012 and 5.1 per cent in 2013. This growth will mainly be driven by relatively strong commodity prices, solid external capital inflows and continued demand and investment from Asia.

However, growth will vary greatly among countries in the continent due to military conflicts, corruption, lack of infrastructure and severe drought in certain areas. The report also warns that unemployment and poverty remain major problems and sources of instability, which have already led to political unrest in North Africa.

South Africa is expected to have the strongest economic growth in 2012, supported by growing demand from Asia, continued fiscal stimulus measures and an increase in consumption driven by rising wages.

The economic picture in the Arab World will continue to be subject of high uncertainty due to the political transition and civil protests brought by the Arab Spring. Regional growth is forecast to decline from 6.6 per cent to 3.7 per cent as violent clashes hampered economic activity in several Arab countries. Social unrest also affected trade and tourism revenues, particularly in Lebanon.

However, the report states that generous social spending measures implemented in 2011 by Arab governments such as Saudi Arabia as a way to alleviate popular protests helped boost economic growth and the impact of these measures will continue to be felt throughout 2012.

In East Asia growth is projected to decline to 6.9 per cent in both 2012 and 2013. China, the biggest economy in the region, is also expected to slow down from 9.3 per cent to 8.7 per cent growth in 2012. A major deceleration from China, however, would represent a more pronounced slowdown for the rest of the region.

The South Asian and Latin American and Caribbean regions remain particularly susceptible to the future of developed economies as both the EU and the US are key export markets as well as sources of tourism revenue.

For Latin America, a slowdown in China would also adversely affect the region as it is a major buyer of its commodities and a key investor in South America.

“Clouds over the region are darkening. The risks of further worsening of the situation in Europe and the United States have increased,” UN economist Rob Vos said in his presentation of the report in Mexico City. “Latin American and Caribbean economies would be hard hit and growth could drop below 1 per cent in the region, with Brazil stagnating and Mexico falling into recession along with the United States economy.” 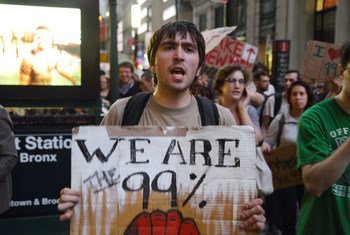 1 December 2011
The world risks falling back into recession if developed countries embark prematurely on fiscal austerity measures, according to a United Nations report released today in New York, which recommends additional stimulus measures as well as more forceful international coordination to stimulate job creation and investment.