The head of the United Nations agency dealing with disaster risk reduction met today with officials in Thailand to discuss new proposals on risk management and to urge government support for business continuity plans following the costliest disaster in the country’s history.

The head of the United Nations agency dealing with disaster risk reduction met today with officials in Thailand to discuss new proposals on risk management and to urge government support for business continuity plans following the costliest disaster in the country’s history.

The cost of the severe floods which hit the Thai capital, Bangkok, in October – the worst in five decades – is estimated at $40 billion. More than 1,000 factories were shut down and 700,000 people were out of work. Over 800 people died in the disaster.

“In each of the last two years 15 per cent to 16 per cent of Thailand’s population has been affected by disasters, mainly floods,” noted Margareta Wahlström, the head of the secretariat of the UN International Strategy for Disaster Reduction (UNISDR)

“I welcome the details of the government’s plan to mitigate future flooding, including a re-forestation programme and improved procedures around the release of water from hydro-electric dams,” she said.

“What we have clearly seen now is that disaster risk is following economic development pathways in Thailand as it is in many other parts of the world,” added Ms. Wahlström, who is the Secretary-General’s Special Representative for Disaster Risk Reduction.

“I appreciate from my meetings with the government, private business people and the Chamber of Commerce that the sheer scale of the economic losses provides an opportunity for a major re-think about the role of risk management and disaster risk reduction in preventing a recurrence of this type of disaster.”

Ms. Wahlström met with Deputy Prime Minister and Minister for Finance, Kittiratt Na-Ranong, visited the ancient site of Ayutthaya and met with representatives of the Fine Arts Department, who explained that flood defences were insufficient to protect the heritage site.

“It is important for future generations that the protection of heritage is included in the overall national water and flood management plan,” she stated. “Climate change and increased weather variability means that we can expect more floods and we need to be prepared.”

In addition, more than 45 per cent of the disasters that occurred in 2011 took place in Asia. Over 85 per cent of those killed and those affected globally and 75 per cent of economic damages were also in Asia. 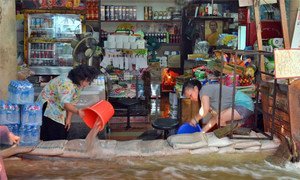 Secretary-General Ban Ki-moon today expressed United Nations solidarity with the people of Thailand after flying by helicopter over areas affected by the massive floods that have inundated large swathes of the country, saying the Organization stands ready to provide any assistance required.