UNISDR/Andy McElroy
Preparations underway in Sendai, Japan, for of the Third World Conference on Disaster Risk Reduction, which runs from 14-18 March 2015.
11 March 2015

Three days before the opening of the Third World Conference on Disaster Risk Reduction, the head of the United Nations office dedicated to dealing with the threat posed by disasters took part today in a ceremony of solemn remembrance in Tokyo for those who died in the Great East Japan Earthquake and Tsunami of 11 March 2011.

“We think today of all those who lost their lives in the tsunami and all those who continue to re-build their lives four years later,” said Margareta Wahlström, the head of the UN Office for Disaster Risk Reduction (UNISDR).

“The learning from that tragic event has helped in the development of a robust new agreement on disaster risk reduction which will be adopted at the Third UN World Conference on Disaster Risk Reduction,” she added in a news release.

At the Conference, which will begin on Saturday in the Japanese city of Sendai, will see the adoption of a successor agreement to the Hyogo Framework for Action, which was agreed by governments 10 years ago in the wake of the Indian Ocean tsunami.

A key focus of the new framework will be on reducing mortality and economic losses by agreeing on measures to bring down existing levels of risk and to avoid creation of new risks, according to UNISDR.

A Preparatory Committee meeting will take place on Friday to discuss the current text of the new agreement, which places a strong emphasis on tackling the underlying drivers of risk such as poverty, climate change, eco-system decline, bad urban planning, land use and risk governance. 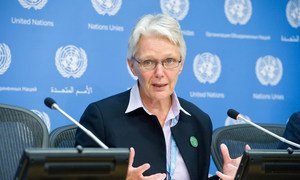 The United Nations office dedicated to disaster risk reduction today appealed to world leaders ahead of a major gathering in northern Japan next week to provide clear, action-oriented guidance to tackle the underlying drivers of risk, such as climate change, which now accounts for 87 per cent of the disasters that have killed some 700,000 people over the past decade.