Nuclear test carried out on 18 April 1953 at the Nevada test site.

Out of a total listed number of 195 States, 182 have so far signed the Comprehensive Nuclear-Test-Ban Treaty (CTBT).

For the treaty to enter into force ratification is required from the so-called Annex 2 States. Of these China, the Democratic People’s Republic of Korea (DPRK), Egypt, India, Iran, Israel, Pakistan, and the United States have yet to ratify it. The Indonesian parliament took the decision to ratify the treaty on 6 December 2011.

Guatemala’s Foreign Minister, Haroldo Rodas Melgar, handed over the instrument of his country’s ratification at a ceremony yesterday at UN Headquarters in New York.

Welcoming this move, Tibor Tóth, the Executive Secretary of the Preparatory Commission for the Comprehensive Nuclear-Test-Ban Treaty Organization (CTBTO), said Guatemala’s ratification is an important building block towards a world free of nuclear weapons.

“It underlines Guatemala’s commitment to outlaw nuclear testing and to enhance non-proliferation and disarmament worldwide,” he stated.

Latin America and the Caribbean was the first region in the world to establish a nuclear-weapon-free zone with the Treaty of Tlatelolco in 1967.

“Guatemala’s ratification of the CTBT is a boost for the Treaty of Tlatelolco, which will soon celebrate 10 years of being the world’s first nuclear-weapon-free zone to include all countries in the region,” noted Mr. Tóth. “This bodes well for the CTBT.”

Among the 33 States in the Latin America and the Caribbean region, 31 have now ratified the CTBT, with Cuba and Dominica being the only countries that have not yet signed or ratified.

Secretary-General Ban Ki-moon has urged all remaining States to sign and ratify the CTBT, with the aim of bringing it into force by 2012.

“My message is clear: Do not wait for others to move first. Take the initiative. Lead. The time for waiting has passed,” he told a high-level conference last September on facilitating the treaty’s entry into force. “We must make the most of existing – and potentially short-lived – opportunities.”

In the meantime, Mr. Ban has urged all States to honour all existing moratoria on nuclear-weapon-test explosions, and to refrain from acting in a manner that undermines the purpose of the treaty. 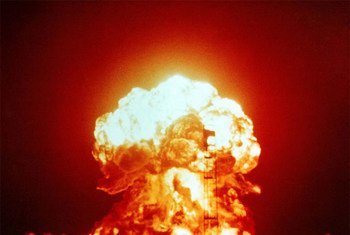 23 September 2011
Secretary-General Ban Ki-moon today urged all remaining States to seize the moment and sign and ratify the global treaty banning nuclear tests, with the aim of bringing it into force by 2012.