IRIN/Tiggy Ridley
Women carry jerry cans of chlorinated water which is being used to contain cholera in eastern DRC.
11 January 2012

Dramatic improvements in water and sanitation services are needed to eliminate cholera in Haiti and the Dominican Republic, health experts who took part in a United Nations-organized briefing to outline concrete steps to stem the spread of the disease in the region said today.

The event, organized by the UN World Health Organization’s (WHO) regional arm, the Pan-American Health Organization (PAHO), urged governments and international organizations to boost investment in the infrastructure and institutional capacity required to provide water and sanitation in areas affected by the disease.

While cholera no longer poses a threat to countries with high standards of hygiene, it remains a challenge in countries with limited access to safe drinking water and adequate sanitation.

PAHO Director Mirta Roses discussed the misconceptions surrounding the provision of water and sanitation, mainly that it is seen as expensive, and emphasized that the costs of not investing in these services is much higher as evidenced by the thousands of people who have died in Haiti since the cholera outbreak in October 2010, ten months after it was hit by a devastating earthquake.

Ms. Roses stressed that the right to water and sanitation is an essential human right, making it crucial for governments to strive to provide these services in every sector of society.

Ms. Roses also underscored the importance of water and sanitation as a pre-requisite for sustainable development and economic growth in any country, and warned that ignoring this would leave countries “extremely vulnerable.”

“As we fight with climate change and the scarcity of water, it is even more important to be responsible but also to be equitable in the distribution of this precious resource,” Ms. Roses said, adding that partnerships are also essential to fight the disease as countries shift from cholera control to cholera elimination.

Kevin De Cock, Director of the United States Centers for Disease Control and Prevention’s (CDC) Center for Global Health, echoed Ms. Roses remarks, stressing the role of the infrastructure in preventing the spread of cholera.

He warned that even though fatality rates have decreased because of effective treatment, “there are still 100 to 200 cholera cases daily in Haiti, and we expect surges with the onset of the rainy season.”

Mr. De Cock said that for Haiti to meet the Millennium Development Goals (MDGs), the global development targets with a 2015 deadline, some 250,000 households will need improved water sources, and another 938,000 will require access to improved sanitation.

The Chief of Water Sanitation for the UN Children’s Fund (UNICEF), Sanjay Wijesekera, argued that in addition to investing in infrastructure, an effective strategy that takes into account the various forms of transmissions is needed, as well as education to encourage behavioural change in communities.

Haitian President Michel Joseph Martelly joined the event via video link and reiterated his Government’s commitment to tackle the disease. “On the eve of the second anniversary of the terrible earthquake that devastated our country, marked progress has been made toward reconstruction, but much remains to be done,” he said.

“Safe drinking water and adequate sanitary facilities are the right of every Haitian. Only a joint, comprehensive strategic approach can help us eliminate cholera, which has stricken half a million Haitians and killed thousands.”

The President of the Dominican Republic Leonel Fernández stressed his Government’s willingness to collaborate with Haiti through vaccination programmes and control strategies. 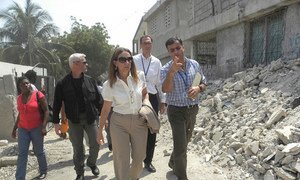