“We… had a year of transition from the humanitarian phase to the recovery and reconstruction phases,” Rebeca Grynspan, the Associate Administrator of the UN Development Programme (UNDP), told reporters in a teleconference organized by UN Foundation to give an update on the situation in Haiti since the 12 January 2010 earthquake.

“It has been a major challenge since that we know that Haiti still needs a combination of humanitarian support… but slowly the emphasis and allocation of resources is shifting towards recovery and reconstruction,” she said.

On job creation, Ms. Grynspan said UNDP had helped create 300,000 temporary jobs since the quake, organizing people to carry out activities such as debris removal, garbage collection and enhancing disaster risk reduction. Forty per cent of the temporary jobs have gone to women.

“This has given 60,000 families possibilities to rebuild their livelihoods, have access to specialized training and cash,” she said. “This is the largest job creation programme we have in the world… 90 per cent of the labour force employed in the execution of UNDP projects is Haitian.”

Efforts are now shifting towards the creation of more sustainable jobs, moving from cash-for-work schemes to cash for production employment, according to Ms. Grynspan.

“We are supporting more and more small businesses, community-based organizations, self-employment and much more training for the labour force for them to be able to have access to the job market,” she added.

“Let us remember that one of the major challenges we face in Haiti is the long-term high rate of unemployment that has been a deeper long-standing crisis.” An estimated 60 per cent of Haiti’s labour force is unemployed, she said.

Ms. Grynspan pointed out that 50 per cent of the debris from the earthquake has been removed, and that efforts included the demolition of damaged buildings that cannot be repaired. “We are talking about five million cubic metres of debris,” she said, explaining that that was the equivalent of five football stadiums full of debris.

On disaster risk reduction, she said UNDP has supported the construction of 2,000 metres of river bank protection structures and helped 10 municipalities in the north, south and south-east of country guard against floods and river overflows during hurricanes and torrential rainfall. Some 400 hectares of land have been reforested in an effort to make the country more resilient to natural disasters.

The UN fund has also supported training programmes for 2,700 people in the country’s civil service and placed national and international experts at the disposal of Haitian Government departments to assist in recovery and capacity building.

“The local Haitian community has played a crucial role in the reconstruction effort and UNDP continues to push for a very participatory approach in its planning to allow Haitians to take control of their country and choose their own future,” said Ms. Grynspan.

On the cholera epidemic outbreak that hit Haiti 10 months after the earthquake, Jon Andrus, the Deputy Director of the UN World Health Organization’s (WHO) regional arm, the Pan-American Health Organization (PAHO), said the outbreak can only be eliminated through capacity building in health and water and sanitation infrastructure.

He pointed out that the cholera outbreak turned out to be one of the largest epidemics of the disease in modern history to affect a single country.

“Over the past year the response from the international community has been substantial with the implementation and promotion of a variety of prevention and control strategies,” he said. “However, despite these intensified efforts, we continue to encounter approximately 200 new cholera cases [of cholera] per day in Haiti and this number will certainly go up during the upcoming rainy season.

“Cholera elimination will require renewed efforts to ensure that safe water and sanitation are provided to every resident. Such efforts will require major investment in capacity development and infrastructure for decades. We as partners have failed to ensure safe water and sanitation is provided to every citizen of Haiti. Now we have this opportunity to reverse that failure,” said Dr. Andrus. 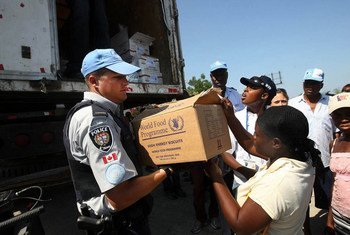 5 January 2012
Almost two years after a devastating earthquake struck Haiti, a high-profile advocate for the United Nations food relief agency has visited the Caribbean country to survey the agency’s efforts in fighting malnutrition among those made homeless by the disaster.