The United Nations is stepping up its peacekeeping presence in the troubled South Sudanese state of Jonglei in the wake of recent inter-ethnic violence that has displaced tens of thousands of people and killed an unknown number of others.

Kouider Zerrouk, a spokesperson for the UN Mission in South Sudan (UNMISS), told UN Radio today that the mission is “beefing up” its presence across Jonglei to support the national Government’s efforts to restore security and protect civilians.

Last weekend a column of about 6,000 armed youths from the Luo Nuer tribe attacked the town of Pibor, where there is a concentrated Murle population, as part of ongoing clashes between the two communities related mainly to cattle rustling and grazing land. Most residents had fled the town before the attack, seeking refuge in the bush.

Mr. Zerrouk said calm had now returned to Pibor, with many internally displaced persons (IDPs) having returned by today and the Luo Nuer youths moving away. UNMISS is conducting daily land and air patrols to deter further violence.

“We are monitoring the situation to make sure that these youth are going towards their locations and not coming back,” he said, adding that the mission was working closely with UN aid agencies to provide humanitarian assistance to the civilians in the area.

Agod Korok, a Pibor resident, said she became separated from her three children during the attack, and does not know whether they are alive or dead. She has sought temporary shelter at a centre for survivors in Pibor.

“We are in need of food because we have to survive,” she said. “We don’t know about our other brothers, whether they are still surviving in the bush or not.”

UNMISS already has peacekeepers deployed in Pibor, but Mr. Zerrouk said “we are also beefing up our presence in Jonglei state. We are also providing the necessary support to the SPLA [Sudan People’s Liberation Army] and to the Government, particularly to airlift and transport around 800 police to the region, who will be there deployed to monitor the security situation.”

He added that in the coming days a humanitarian assessment mission is planned to the affected area. The UN World Food Programme (WFP) has been rushing emergency food rations to Pibor and nearby areas this week. 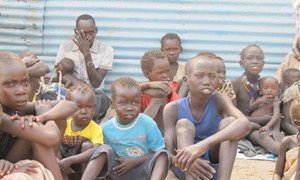 The United Nations World Food Programme (WFP) expressed deep concern today about the deadly ethnic violence in South Sudan’s Jonglei state, where thousands of people have had to flee their homes in recent days.