WFP/Rehan Zahid
These orphaned children received food from WFP after a humanitarian mission arrived in the town of Pibor in South Sudan's Jonglei state on 3 January 2012.
4 January 2012

The United Nations World Food Programme (WFP) expressed deep concern today about the deadly ethnic violence in South Sudan’s Jonglei state, where thousands of people have had to flee their homes in recent days.

In a statement issued today, WFP said the violence between the Lou Nuer and Murle groups “has pushed the food security situation to crisis levels” in Jonglei, the largest state in South Sudan.

Thousands of Murle civilians, including many women and children, have sought refuge in forests and swamps to avoid attack from rival ethnic groups, and they have little or no access to food and clean drinking water.

This follows an attack last weekend against the town of Pibor by a 6,000-strong column of armed youths from the Lou Nuer tribe.

Lise Grande, the UN Humanitarian Coordinator for South Sudan, said the exact number of casualties from the attack was unknown, but peacekeepers serving with the UN mission (UNMISS) had helped to rescue and evacuate civilians and deter further violence.

Ms. Grande told UN Radio today that a joint UN-Government humanitarian delegation that visited Pibor in the aftermath of the attack found the town to be intact but the humanitarian situation to be grim.

“We saw many people returning, and their condition was serious,” she said. “Families had been out in the bush for up to a week.”

WFP has started rushing in supplies to Pibor residents, with enough emergency rations to feed more than 1,000 people for two weeks.

The agency has also pre-positioned food in the town of Boma, where hundreds of displaced people have gathered and continue to arrive. 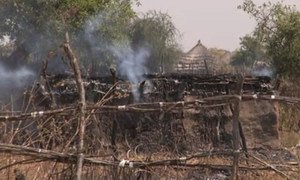 While the showdown between the South Sudanese military and thousands of armed tribesmen over the flashpoint town of Pibor has subsided, the humanitarian situation in the area remains grim, a top United Nations official in the country warned today.