23 December 2011
A group of independent United Nations experts today denounced the continued secret detention of Chinese human rights lawyer Gao Zhisheng, who was arrested in 2006 for allegedly spotlighting abuses in his country.

The experts, who report to the UN Human Rights Council, issued a news release voicing concern at a recent decision by a Beijing court to withdraw Mr. Gao’s five-year probation, which was to end this week.

The court ordered Mr. Gao, whose whereabouts have been unknown for the last 20 months, to serve a three-year sentence.

“It is alarming that Mr. Gao continues to be arbitrarily detained,” stated El Hadji Malick Sow, Chair-Rapporteur of the Working Group on Arbitrary Detention, which issued an opinion in 2010 declaring Mr. Gao’s detention arbitrary as it lacked any legal basis.

“His detention over the years has resulted in various human rights violations, including his fundamental right to a fair trial. I urge the authorities to release Mr. Gao,” the Rapporteur added.

Mr. Gao has been charged with subversion of State power, although this has never been proven in a court of law, according to the news release. In 2005 his licence to practice law was revoked and his firm shut down allegedly in response to his call for the Government to end abuse of religious groups.

“Under no circumstances should Mr. Gao be subjected to attacks, including arbitrary detention, aimed at preventing him from exercising his legitimate right to freedom of expression as a human rights lawyer,” Frank La Rue, the Special Rapporteur on the promotion and protection of the right to freedom of opinion and expression, stated.

During his probation, Mr. Gao has been secretly detained multiple times, and there are concerns regarding his health. The experts said it is unclear why Mr. Gao is to serve his sentence when his probation was about to end.

“His detention in an unknown location is an enforced disappearance and a crime under international law,” said Jeremy Sarkin, Chair-Rapporteur of the Working Group on Enforced or Involuntary Disappearances, which will continue to keep a close eye on his case.

FROM THE FIELD: Keeping hope alive in Mogadishu 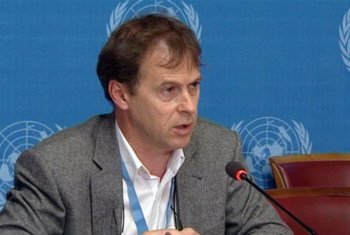