23 December 2011
Nicaragua has filed suit against Costa Rica at the United Nations International Court of Justice (ICJ), citing violations to national sovereignty and major environmental damages to its territory due to the construction of a new road along the banks of the San Juan River.

Nicaragua contends that the construction work by its southern neighbour along most of the border area between the two countries is resulting in grave environmental consequences, according to a press release issued by the ICJ, which is also known as the World Court.

Nicaragua argues that “Costa Rica’s unilateral actions… threaten to destroy the San Juan de Nicaragua River and its fragile ecosystem, including the adjacent biosphere reserves and internationally protected wetlands that depend upon the clean and uninterrupted flow of the river for their survival.”

Among the damages listed by Nicaragua is the dumping of sediments in the river such as soil, uprooted vegetation and felled trees, which the Government says are a danger to water quality, aquatic life – including several endangered species – and to rare flora and fauna on both sides of the river bank.

In addition, it states that the sediments will degrade the soil already devastated by deforestation due to agricultural and industrial developments in Costa Rica’s territory, adding that the impact if these is already being felt. “These works have already caused and will continue to cause economic damage,” Nicaragua said.

The Nicaraguan Government is requesting the court to declare that Costa Rica has breached its territorial integrity, as well as its obligation under international law and several environmental conventions to protect the environment and biodiversity in the region.

It is also requesting that the court declare that Costa Rica must restore and pay for all the damages and not undertake any further developments in the area without a cross-border environmental impact assessment, which is presented to Nicaragua for analysis and reaction.

Nicaragua stated in its proceedings that Costa Rica has repeatedly refused to give it appropriate information on the construction work it is undertaking and has denied any obligation to prepare and provide it with an assessment of the environmental impact in the area, which would allow for an evaluation of the work.

Nicaragua stressed that producing an assessment and presenting it to both governments is of utmost importance and added that it reserves the right to request provisional measures.

The two countries have had disputes over their borders before. In July 2009, the ICJ issued a ruling over what navigational and related rights Costa Rica has in the section of the San Juan River close to its mouth at the Caribbean Sea.

The ICJ, which is based in The Hague, is the principal judicial organ of the UN. Its rulings are binding and without appeal.

FROM THE FIELD: Keeping hope alive in Mogadishu 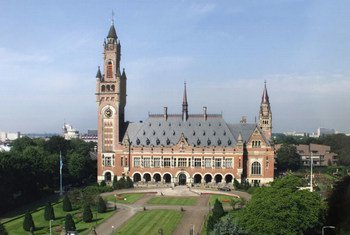 13 July 2009
Costa Rican tourist and commercial boats have the right to travel along the river that defines part of its border with Nicaragua, but Nicaragua has the right to regulate the river traffic, the United Nations’ top court ruled today.