Mothers with hungry children lining up at distribution site in Taoa, Niger, for food handouts
6 December 2011

The United Nations relief chief today announced the allocation of $6 million from the world body’s humanitarian fund to support efforts to alleviate the suffering of millions of people facing severe food shortages in Niger.

The funds from the Central Emergency Response Fund (CERF), which is managed by OCHA, “will ensure that the response to meet food, nutrition and agriculture needs will be provided when it is desperately needed,” said Ms. Amos, who is also UN Emergency Relief Coordinator.

Large sections of Niger’s population have not recovered from last year’s food crisis caused by drought in West Africa’s Sahel region, and the next “lean season” is expected to begin earlier and last longer next year, according to OCHA.

The CERF funding will enable three UN agencies to intervene early to avoid a deterioration of the nutritional status of vulnerable people, especially children.

“The Government of Niger and humanitarian partners are working together to ensure we effectively address this crisis throughout 2012,” said Guido Cornale, the acting Humanitarian Coordinator and UN Children’s Fund (UNICEF) Representative in Niger.

“This allocation from CERF will ensure we can deliver immediate relief to stabilize the situation for the next three months.”

The UN World Food Programme (WFP) has been allocated more than $3.3 million to fund its food distribution efforts, while the UN Food and Agriculture Organization (FAO) will receive $700,000 to support its projects to assist vulnerable herder communities.

An allocation of more than $1.9 million will fund UNICEF’s work to ensure adequate care for excess caseloads of severely malnourished children under the age of five.

CERF has allocated more than $74 million for relief operations Niger over the past five years. Some of the funds were used to assist people fleeing from the crisis in Libya earlier this year, those affected by last year’s food shortages, and to combat disease outbreaks in 2009. 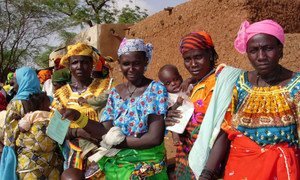 The majority of villages in impoverished Niger are now considered to be in a food and nutritional crisis, the United Nations humanitarian wing warned today, with the country facing especially tough times as the annual harvest season ends.