UNICEF/Sylvain Cherkaoui
A child wanders in the refugee camp of Assaga, near Diffa, Niger. More than 135 displacement sites have been noted along the border with Nigeria, where there has been increased acts of violence conducted by Boko Haram.
15 June 2016

Faced with a new wave of displacement following recent Boko Haram attacks in Niger’s south-eastern Diffa region and with needs on the rise, the United Nations food relief agency plans to double its food and nutrition assistance, aiming to gradually increase its life-saving support to more than 250,000 people in Niger’s embattled southern region.

In recent days, the World Food Programme (WFP) distributed 15-day emergency food rations to more than 1,400 newly displaced people finding refuge in Diffa town. This week, food assistance is on its way for thousands more newly displaced people at sites between Diffa and Bosso towns, with 157 metric tonnes on the move.

“Tens of thousands of people have been uprooted this past week following what was the deadliest attack since April 2015,” said Belkacem Machane, WFP Niger Deputy Country Director. “More than half of them are women and children. These are people who have already been displaced several times due to the violence spilling across the border with Nigeria. They have now reached the end of their rope.”

“Many have walked from 10 to 40 kilometres. They are arriving in a state of shock, and urgently need food, shelter, water – assistance with their most basic needs,” added Machane.

As the situation of the newly displaced people becomes clearer, WFP plans to continue reaching those most in need in Diffa town and at displaced people’s sites at Ngagam, Kintchandi and Garim Wazam.

More than 240,000 people have been displaced in Diffa region. A total of 450,000 people in the region – nearly 70 percent of the population – face hunger. With the onset of the lean season, WFP is concerned that hunger can only deepen.

Where markets are functioning and food is available, WFP provides cash assistance so that people can buy the food that they need for their families, and also support the local economy. About 40,000 people have been reached with cash assistance. Each family receives 32,500 CFA, or about $54 per month.

“Many displaced people live outside of formal sites in an extremely difficult situation – both they and the local population taking them in need support. A lack of funding has been forcing us to make tough choices as we cannot fully meet their needs,” said Machane.

“We are now facing not only the most difficult period of the year – the lean season when food stocks are low – but also the challenges of responding to a significant number of newly displaced people who need urgent life-saving assistance. Current shortfalls have prevented us these past days from providing a full month food ration to the newly displaced people,” added Machane.

WFP urgently requires $20 million for the next six months to assist people affected by the Lake Chad crisis. 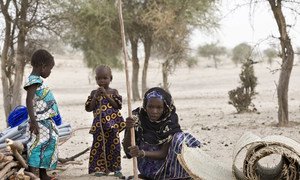 Tens of thousands of people have fled their homes in south-east Niger following near back-to-back attacks since this past Friday by Boko Haram insurgents on the town of Bosso in the troubled Diffa region, the United Nations refugee agency said today.