Security Council members today strongly condemned the twin terrorist attacks in Norway that have killed more than 90 people, including many young people, and left numerous others injured.

At least 85 people died at Utoya after a lone gunman opened fire yesterday afternoon on participants in a youth camp connected to the ruling Labour Party, according to media reports.

That attack followed a large bomb blast in central Oslo, close to key Government buildings, which killed another seven people. Norwegian police have reportedly said that the attacks are linked.

In a statement to the press issued today, the Council deplored the attacks and voiced its deep sympathies for the victims and their families, and to both the people and Government of Norway.

“The members of the Security Council reaffirmed that terrorism in all its forms and manifestations constitutes one of the most serious threats to international peace and security, and that any acts of terrorism are criminal and unjustifiable, regardless of their motivation, wherever, whenever and by whomsoever committed,” the statement stressed.

Today's statement echoes the comments made yesterday by Secretary-General Ban Ki-moon and General Assembly President Joseph Deiss, who also condemned the attacks and expressed their condolences.

Describing Norway as a staunch supporter of the United Nations, Mr. Stoltenberg said it was important for Norwegians to receive the solidarity of the UN, according to information released by Mr. Ban's spokesperson.

♦ Receive daily updates directly in your inbox - Subscribe here to a topic.
♦ Download the UN News app for your iOS or Android devices.
norway 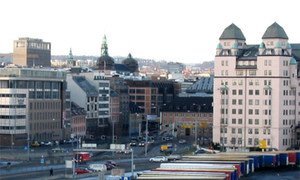 Secretary-General Ban Ki-moon and General Assembly President Joseph Deiss voiced their shock after a deadly explosion struck the centre of the Norwegian capital, Oslo, earlier today, and a gunman shot dead participants at a nearby youth camp.