23 July 2011
The United Nations-managed humanitarian fund has allocated more than $51 million to deliver food aid to thousands of needy people across the Horn of Africa, which has been ravaged by a drought so severe that parts of southern Somalia are now experiencing famine.

The Central Emergency Response Fund (CERF) gave $20 million to aid agencies and projects in Somalia, $14.6 million to Ethiopia, $13.6 million to Kenya and a separate $3.1 million to support refugees on the move as a result of the current crisis.

The UN Office for the Coordination of Humanitarian Affairs (OCHA) said yesterday that the funds have been given out over the past two weeks in response to the intensifying crisis across the region, where rainfall has been substantially lower than usual over the past year.

The $51 million should enable more than 40,000 tons of food aid to be delivered, as well as support other water, sanitation, hygiene and livestock vaccination projects, according to OCHA.

An estimated 11.6 million people now need humanitarian assistance in Somalia, Ethiopia, Kenya and Djibouti, and on Wednesday the UN declared a famine in two regions of Somalia – southern Bakool and Lower Shabelle.

UN agencies, including the World Food Programme (WFP), the World Health Organization (WHO), the UN High Commissioner for Refugees (UNHCR) and the UN Children's Fund (UNICEF), have stepped up efforts to provide relief to those in need, although conflict in Somalia has left some areas isolated.

On Monday, top UN officials and representatives of donor countries and non-governmental organizations (NGOs) will gather in Rome for a high-level meeting to coordinate the emergency response to Somalia and raise additional funds for immediate relief.

CERF's latest allocation follows the release of about $30 million in February and March, when many humanitarian agencies reported that severe drought conditions were emerging in the Horn of Africa.

Set up in part to ensure rapid assistance for people hit by crises and natural disasters, CERF has been operating since 2006 and relies on contributions from UN Member States and the private sector. 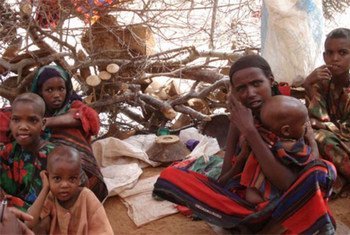 22 July 2011
Secretary-General Ban Ki-moon today made an impassioned plea to the international community to mobilize resources to avert a humanitarian catastrophe in Somalia, where severe drought has plunged communities in the southern region of the country into famine.