1 October 2010
The United Nations refugee agency said today it is revising its policies to protect people fleeing persecution due to their sexual orientation or gender identity, after a survey highlighted the dangers and prejudice faced by lesbians, gays, bisexuals, transsexuals and intersex asylum-seekers and refugees.

“These risks are significant and should not be ignored,” said Melissa Fleming, spokesperson for the UN High Commissioner for Refugees (UNHCR).

The agency said that the existence of laws criminalizing same-sex relations in many countries, including the death penalty in seven, poses significant problems for these asylum-seekers and refugees.

Such laws, whether enforced or not, impede their ability to access state protection in their home countries.

The survey – carried out in advance of a meeting this week with government experts, international organizations, non-governmental organizations (NGOs), academics and judicial officials – found that people from these groups are more prone to sexual- and gender-related violence during detention, both in their home countries and countries of asylum.

It also found that they face a heightened risk of discrimination in urban settings and refugee camps.

“UNHCR guidelines and policies will be revised to ensure that the particular vulnerability of these groups is recognized at every stage in our interaction with refugees,” said Ms. Fleming.

The agency is advocating for resettlement of individuals who face a heightened risk as a result of belonging to these groups, and calls on resettlement States to recognize their vulnerability.

Last month both Secretary-General Ban Ki-moon and High Commissioner for Human Rights Navi Pillay appealed to all countries that criminalize people on the basis of their sexual orientation or gender identity to reform such laws and to ensure the protection of basic human rights for all.

“No doubt deeply-rooted cultural sensitivities can be aroused when we talk about sexual orientation. Social attitudes run deep and take time to change. But cultural considerations should not stand in the way of basic human rights,” Mr. Ban said in a message to a panel discussion in Geneva on ending violence and criminal sanctions based on sexual orientation and gender identity.

Ms. Pillay told the gathering that, despite significant progress in a number of States, there is still no region in the world today where people who are gay, lesbian, bisexual, transgender or intersex can live entirely free from discrimination or from the threat of harassment and physical attack.

“We should be looking for ways to ensure that everyone enjoys the full protection of international human rights law, not for grounds to justify excluding certain individuals,” she said, adding that the first priority should be decriminalization worldwide, accompanied by greater efforts to counter discrimination and homophobia. 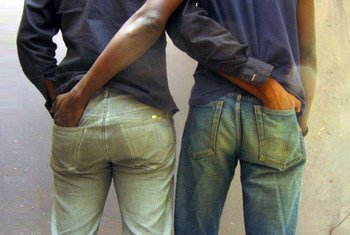 17 September 2010
Top United Nations officials today appealed to all countries that criminalize people on the basis of their sexual orientation or gender identity to reform such laws and to ensure the protection of basic human rights for all.