Liberia: UN speaks out against draft law that would criminalize homosexual behaviour

The United Nations human rights office today voiced concern about draft legislation currently being considered by Liberian lawmakers that would broadly criminalize homosexual behaviour, adding that it will negatively impact vulnerable populations in the country.

The legislation, which has already been passed by the Liberian Senate but is still being considered by the House of Representatives, makes homosexual behaviour a second degree felony for which people can be fined and imprisoned for up to five years.

According to the Office of the High Commissioner for Human Rights (OHCHR), the proposed legislation would impose penalties for a person who “seduces, encourages, or promotes another person of the same gender to engage into sexual activities.”

“We are also concerned about the atmosphere of intimidation and violence against gay and lesbian activists, as well as reports of attacks against them,” said OHCHR spokesperson Ravina Shamdasani. “Such harassment illustrates the difficult, discriminatory environment in which gay rights activists are operating.”

Sodomy, voluntary and involuntary, is already a criminal offence under Liberian law. However, Ms. Shamdasani stressed that the proposals under consideration, including one to explicitly prohibit same-sex marriage, could make an already bad situation for lesbian and gay people in Liberia even worse.

“Legislation criminalising homosexuality can have a seriously negative impact, not only on gay and lesbian people, but also on the most vulnerable populations, such as people living with HIV, sex workers, refugees and internally displaced populations, who might be in need of special attention but will not come forward due to the high risk of stigmatisation, discrimination and possible violence,” she told a news conference in Geneva.

OHCHR called on Liberia to implement the international human rights treaties that it has ratified, including the International Covenant on Civil and Political Rights, and warned that laws criminalising homosexual acts between consenting adults violate individuals’ rights to privacy and to freedom from discrimination.

♦ Receive daily updates directly in your inbox - Subscribe here to a topic.
♦ Download the UN News app for your iOS or Android devices.
sexual orientation 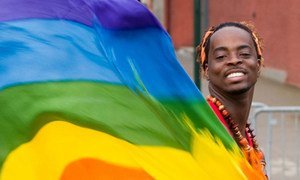 Marking International Day against Homophobia and Transphobia, senior United Nations officials today drew attention to laws around the world which discriminate against lesbian, gay, bisexual and transgender (LGBT) people, and called for equality and the repeal of such laws.