13 July 2010
Women in Latin America and the Caribbean are still discriminated against in the labour market and receive lower wages than men for the same work, according to a new United Nations report which also points to women in the region spending more time on unpaid domestic or care work.

“It will not be possible to achieve equality for women in the workplace until the burden of unpaid and care work which they have historically shouldered has been resolved,” Alicia Bárcena, Executive Secretary of the Economic Commission for Latin America and the Caribbean (ECLAC), said as she presented the report in Brazil.

“This calls for the establishment of a new virtuous equation that encompasses the State, the market and the family,” she stated.

The report – entitled “What kind of State? What kind of equality?” – reviews achievements made as well as the challenges facing countries in the region.

According to a news release issued by ECLAC, studies of the total workload, including paid and unpaid, of men and women in different countries in the region shows two trends. In all cases, total work time is greater for women than for men, and women devote more of their time to unpaid work than men.

Women in Brazil, for example, devote 56.6 hours per week to total work, compared to 52 hours for men. In Mexico, women spend a total of 76.3 hours working, whereas men spend only 58.4 hours.

Figures from 2008 show that 31.6 per cent of women over the age of 15 had no income of their own, while only 10.4 per cent of men were in the same position. Also, more women than men were unemployed, at 8.3 per cent and 5.7 per cent respectively.

While the wage gap has narrowed – women’s average income rose from 69 per cent of that of men in 1990 to 79 per cent in 2008 – women continue to be overrepresented in lower-income occupations and underrepresented in senior positions. Women still receive lower wages than men for work of equal value.

The report emphasizes the need to raise awareness of the economic and social value of the unpaid and care work performed by women in the region. It also stresses the importance of empowering women to exercise their right to choice, so that they can participate under equal conditions in the labour market and in decision-making.

It proposes a strategy for advancing equality, based on three main pillars: the State as a guarantor of effective entitlement to rights; equality in both public and private spheres; and redistribution of total work.

The report was presented by ECLAC at the 11th session of the Regional Conference on Women in Latin America and the Caribbean, which began today in the Brazilian capital, Brasilia. 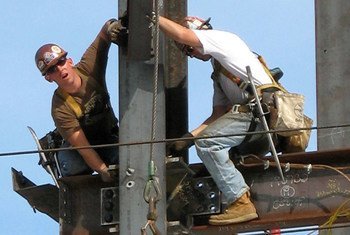 2 October 2009
The urban unemployment rate in Latin America and the Caribbean has climbed slightly to 8.5 per cent in the second quarter of 2009, with the United Nations forecasting that rate will stay constant through the end of the year.