The United Nations chief on Tuesday highlighted the central role he hopes Latin America and the Caribbean region will play in ensuring “fair globalization” that leaves no one behind.

Addressing a session of the Economic Commission for Latin America and the Caribbean (ECLAC), which opened in Cuba on Monday, Secretary-General António Guterres said the forum “is central to supporting the countries of the region in the implementation of the 2030 Agenda for Sustainable Development.”

The meeting brings together representatives from ECLAC’s 46 member States and 13 associate members to debate the main challenges for implementing the 2030 Agenda in the region.

Mr. Guterres noted that globalization has brought many benefits, but it has left too many behind.

Women are still far less likely to participate in the labour market – and the gender pay gap remains a global concern. Youth unemployment is alarmingly high in many countries across the world, he said.

The UN chief commended ECLAC for having been “a progressive and authoritative champion” for social justice in the global economy and “a pioneer” in integrating the economic, social and environmental development.

ECLAC has also “consistently and courageously put forward a development vision with equality as a driver of growth” he said, and focused on what he called the  “deeper meaning” of equality: looking beyond income as a measure of well-being and the main litmus test for development cooperation.

“Seventy years after its founding, ECLAC continues to be where it has always been — on the frontlines pushing for a fair globalization by producing evidence-based policies, technical analysis and knowledge to help forge structural progressive economic transformation,” Mr. Guterres said.

A study, entitled The Inefficiency of Inequality, was unveiled at the session, which emphasizes that pro-equality policies make positive contributions to social well-being and help create a fairer economic system, conducive to better learning and concern for the environment.

In it, ECLAC insists on the need to move toward a new development pattern that allows for achieving a virtuous circle between growth, equality and sustainability for present and future generations.

ECLAC
UN chief António Guterres getting a tour of Old Havana during a visit to Cuba in May 2018.

While in the Cuban capital, Havana, the Secretary-General toured the historic centre of Old Havana, and met the newly-appointed Cuban President Miguel Díaz-Canel as well as his predecessor, former President Raúl Castro, who stepped down last month.

Upon arrival at Havana airport on Monday, Mr. Guterres said he had last visited Cuba almost 20 years ago, when he was Prime Minister of Portugal to attend an Ibero-American summit.

♦ Receive daily updates directly in your inbox - Subscribe here to a topic.
♦ Download the UN News app for your iOS or Android devices.
cuba|eclac 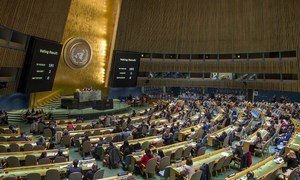 The United Nations General Assembly on Wednesday adopted a resolution underlining the need to end the economic, commercial and financial embargo imposed by the United States against Cuba.