Around the world, UN peacekeepers honour their own during annual event 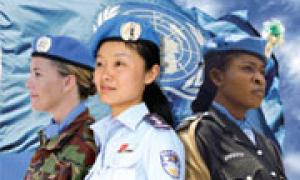 With the laying of wreaths, cultural activities, parades and photo exhibitions, United Nations personnel serving across the globe are honouring those peacekeepers who have fallen and those who continue to serve in the cause of peace.

This year’s commemoration of the International Day of United Nations Peacekeepers, which is observed annually on 29 May, is a particularly sombre one due to the heavy loss of life of peacekeepers in the tragic earthquake in Haiti in January, as well as attacks in Darfur and an assault on UN staff at a guest house in Kabul.

Over the course of 2009 and in the first few months of this year, 218 peacekeepers lost their lives in the service of the Organization – 96 in Haiti’s devastating earthquake in January alone.

Speaking at a wreath-laying ceremony in New York for fallen colleagues, Deputy Secretary-General Asha-Rose Migiro noted that the Day is an occasion to celebrate the remarkable contributions of peacekeepers, who do so much more than keeping the peace. “They build bridges… they earn trust… they help societies heal the wounds of war,” she said.

“But today we also remember the terrible price they pay for their critical but dangerous work,” she added.

“It’s important because we get an opportunity to let the rest of the world know what we are doing as peacekeepers all over the world,” said Emmanuel Mollel, who serves with the joint UN-African Union peacekeeping mission in Darfur (UNAMID), in an interview with UN Radio about the International Day.

“It gives us a time to look back and even reflect on our colleagues who have lost their lives in the cause of peace throughout the world,” added Mr. Mollel, the chief of water and environment protection at the mission.

Earlier this month two Egyptian peacekeepers serving with UNAMID were killed and three others seriously wounded when their patrol was attacked in South Darfur state. The deaths brought to 24 the number of UNAMID personnel killed as a result of hostile actions since the mission was established in the strife-torn Sudanese region two years ago.

“I think the major challenge is that in a normal, traditional peacekeeping mission, the peacekeepers normally go into an area where there is a peace agreement that has been signed,” noted Mr. Mollel, adding that, unfortunately, that is not the case for UNAMID.

The mission is marking the International Day on Sunday with a wreath-laying ceremony and the lowering of flags of the UN and the AU, as well as cultural activities, parades and photo exhibits.

Meanwhile, a multimedia exhibit entitled Ayiti Kanpe – ‘Haiti Standing’ – which documents and recounts the loss suffered in the 12 January earthquake is on display at UN Headquarters in New York and available online.

Of the 101 fatalities suffered by the UN as a result of the quake, 96 were from the UN Stabilization Mission in Haiti (MINUSTAH), the biggest single loss of life in the history of UN peacekeeping.

The exhibit is an effort to acknowledge the tremendous loss suffered by the Haitian people and the UN family after the quake, to honour those who paid the ultimate sacrifice and to pay tribute to those who work to help the country move forward.

“Haiti tested us to the limit and we showed we have learned from experience and were able to deliver,” Susana Malcorra, Under-Secretary-General for Field Support, told a news conference in New York. “It was the best way to pay tribute to the ones we lost,” she added.

The UN Peacekeeping Force in Cyprus (UNFICYP) is also marking the Day with a showing of photographs of peacekeepers at work in Haiti and in Cyprus. The UN force has been on the Mediterranean island since 1964 after an outbreak of inter-communal violence.

At a memorial service in Monrovia for fallen colleagues, the top UN envoy to Liberia staff to continue their work to bring peace, stability, dignity and prosperity to a world in need. “Let us not allow their sacrifice to be in vain; let us continue their legacy around the world and here in Liberia to wholeheartedly labour towards consolidating peace.”

The Commander of the UN Interim Force in Lebanon (UNIFIL) shared similar sentiments at a wreath-laying ceremony held at its headquarters in Naqoura to mark the Day.

“I think that this commemoration is also an appropriate occasion to reiterate our determination to make every effort to contribute to the achievement of peace and stability in southern Lebanon,” said Major-General Alberto Asarta Cuevas.

This year’s commemoration comes at a time when the demand for UN peacekeeping is in greater demand than ever, with over 124,000 peacekeepers serving in 16 operations on four continents.

The United Nations has voiced outrage after two peacekeepers serving with the joint African Union-UN force in Sudan's war-scarred Darfur region were killed and three others seriously wounded in an ambush earlier today.