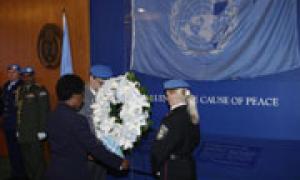 The United Nations celebrated on 28 May the dedication and courage of the men and women who play an indispensable role in the cause of peace around the world, while honouring the sacrifices of those who paid the ultimate price in that service.

The eighth annual International Day of United Nations Peacekeepers pays tribute to the more than 124,000 personnel who are serving in 16 operations on four continents, doing everything from clearing landmines and delivering aid to helping refugees and supporting free and fair elections.

“Our courageous peacekeepers are among the best of what the United Nations has to offer,” Deputy Secretary-General Asha-Rose Migiro remarked during a wreath-laying ceremony at UN Headquarters in New York to honour fallen colleagues.

“This is a day to celebrate their remarkable contributions. They do so much more than keeping the peace: they build bridges… they earn trust… they help societies heal the wounds of war,” she said. “But today we also remember the terrible price they pay for their critical but dangerous work.”

This year’s observance is a particularly sombre one owing to several tragedies that struck UN peacekeeping over the last year, from ambushes in Darfur, terrorism in Kabul, and the tragic earthquake in Haiti.

As part of the commemorative events, 218 peacekeepers who lost their lives while serving under the blue flag over the past 14 months were posthumously awarded the Dag Hammarskjöld medal at a ceremony presided over by Under-Secretary-General for Peacekeeping Operations Alain Le Roy.

This year’s theme is “Haiti Standing,” to mark the loss of 101 UN peacekeepers in the 12 January quake and highlight the ongoing contributions by the UN Stabilization Mission in Haiti (MINUSTAH) to the country’s recovery.

The tragedy in Haiti represented the biggest single loss of life in UN peacekeeping history, Secretary-General Ban Ki-moon noted in his message for the Day.

“But that dark day also became one of our finest hours, as the men and women of MINUSTAH set aside their own trauma, got the mission quickly back on its feet and helped the people of Haiti cope with the horrific aftermath,” he stated.

Mr. Ban, who is currently attending an international conference in Rio de Janeiro, met yesterday with the families of Brazilian peacekeepers killed in the Haiti earthquake, and participated at the unveiling of a commemorative plaque for the peacekeepers.

“Hope in action. That is their legacy,” he told the gathering. “They gave everything for the country of Brazil… for the people of Haiti… for the work of the United Nations.”

General Assembly President Ali Treki, in his message for the Day, noted that some 9,000 personnel in uniform are currently providing security, clearing roads, conducting patrols, helping to restore basic services to the Haitian people, and much more.

“Thanks to the courageous efforts of our peacekeepers in Haiti, there is hope and opportunity to recover and rebuild from a catastrophe of such proportions.”

The Assembly established the International Day in 2002 to pay tribute to all men and women serving in UN peacekeeping operations for their high level of professionalism, dedication and courage, and to honour the memory of those who have lost their lives in the cause of peace.

The 192-member body designated 29 May as the Day, as it was the date in 1948 when the first UN peacekeeping mission, the UN Truce Supervision Organization (UNTSO), began operations in Palestine. As that falls on a Saturday this year, many commemorative events have been held on 28 May.

Secretary-General Ban Ki-moon today led United Nations staff and the family and friends of personnel who perished in the Haitian earthquake in honouring the memory of the 101 men and women who made the ultimate sacrifice in the service of the Organization.