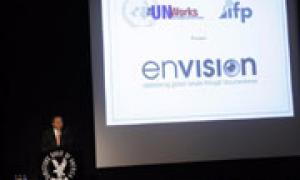 There are women around the world suffering violence or the oppression of poverty who remain silent and invisible, Secretary-General Ban Ki-moon today told the opening of an international documentary filmmakers’ forum aimed at bringing their stories into focus.

“Over the next two days you will watch and discuss documentaries on women and the Millennium Development Goals [MDGs],” Mr. Ban said at the inaugural Envision: Addressing Global Issues through Documentaries forum in New York.

Among the screenings are films showing how a Liberian woman “braved the tide of hate that was sweeping over” her war-torn country by bringing women together to sing for peace; how micro-credit is helping women climb out of poverty; and the struggles of girls and women in strongly patriarchal and traditional societies.

“We will also experience the suffering of a young girl in South Africa, victim of a vicious rape,” noted Mr. Ban. “We will witness the healing support she received, how she was encouraged to give voice to her pain, and how that helped to identify her attacker.”

This year’s discussions will focus on the MDGs, a set of eight internationally agreed anti-poverty targets with a 2015 deadline, and their impact on women.

“Declaring these goals has galvanized an unprecedented level of support,” noted Mr. Ban. “We have made considerable progress, but there is still much work to do.”

Underscoring the need to increase awareness about MDGs, the Secretary-General recently launched the UN Creative Community Outreach Initiative, which acts as a liaison between the Organization and producers, directors, writers, and new media professionals who want to inform the public about critical global issues.

The Secretary-General called on the “many gifted storytellers in our community to help us tell our stories,” and to help the UN “shine a light on these important issues.”

He added that the Envision film and discussion series is one of his initiative’s first projects and that he was confident it would make an impact.