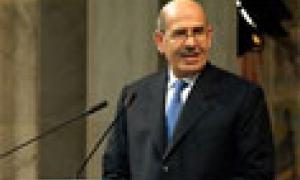 “We must ensure – absolutely – that no more countries acquire these deadly weapons. We must see to it that nuclear-weapon States take concrete steps towards nuclear disarmament. And we must put in place a security system that does not rely on nuclear deterrence,” he declared at the award ceremony in Oslo, Norway, on Saturday.

To realize these goals, Mr. ElBaradei, who shared the prize with the organization he heads, proposed three “urgently required” steps.

First, nuclear and radiological material must be kept out of the hands of extremist groups by protecting nuclear facilities, securing powerful radioactive sources, training law enforcement officials and monitoring border crossings. In the past four years the IAEA has completed perhaps 50 per cent of the work, “but this is not fast enough, because we are in a race against time,” he declared.

Second, control over operations for producing the nuclear material that could be used in weapons must be tightened by such operations multinational so that no one country can have exclusive control. “My plan is to begin by setting up a reserve fuel bank, under IAEA control, so that every country will be assured that it will get the fuel needed for its bona fide peaceful nuclear activities,” he said.

Third, disarmament efforts must be accelerated. “We still have eight or nine countries who possess nuclear weapons,” he noted. “We still have 27 000 warheads in existence. I believe this is 27 000 too many,” he added, proposing that nuclear-weapon States reduce the strategic role given to these weapons.

But even these concrete steps that can readily be taken are not enough. “The hard part is: how do we create an environment in which nuclear weapons – like slavery or genocide – are regarded as a taboo and a historical anomaly?” Mr. ElBaradei declared, calling on the world to embrace the mind-set of brotherhood, tolerance and sanctity of life that all religions expound.

“Imagine what would happen if the nations of the world spent as much on development as on building the machines of war. Imagine a world where every human being would live in freedom and dignity. Imagine a world in which we would shed the same tears when a child dies in Darfur or Vancouver,” he concluded, referring to the murderous conflict in Western Sudan, one of the world’s poorest regions, and life in Western Canada, one of the most affluent.

“Imagine a world where we would settle our differences through diplomacy and dialogue and not through bombs or bullets. Imagine if the only nuclear weapons remaining were the relics in our museums. Imagine the legacy we could leave to our children. Imagine that such a world is within our grasp.”