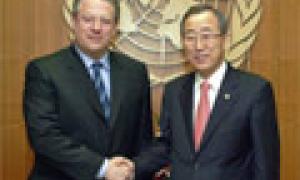 In a statement released by his spokesperson, Mr. Ban paid tribute to Mr. Gore's “exceptional commitment and conviction, as an example of the crucial role that individuals and civil society can play in encouraging multilateral responses to global issues.”

His spokesperson said Mr. Ban “rejoices with the IPCC, and its co-sponsors, the United Nations Environment Programme and the World Meteorological Organization.”

Mr. Ban, who has made addressing climate change a key priority of his administration, pointed out that the IPCC's “lucid and well-documented findings” helped to establish “beyond doubt that climate change is happening, and that much of it is caused by human activity.”

This led to “unprecedented momentum for action on climate change around the world, and recognition of the UN as the forum for reaching agreement on it,” he said.

The Secretary-General, who last month convened summit-level talks on the issue in New York to jump-start diplomatic action on climate change, called for industrialized and developing countries alike to commit themselves to a real breakthrough at the critical Conference of the Parties to the UN Framework Convention on Climate Change in Bali in December.

That meeting will serve to hammer out a successor agreement to the Kyoto Protocol, which contains legally binding targets for greenhouse gas emissions but will expire in 2012.

UNEP Executive Director Achim Steiner also praised the decision of the Nobel Peace Prize Committee, saying it “has today made it clear that combating climate change is a central peace and security policy for the 21st century.”

He said the two winners “have contributed significantly to elevating public attention on the issue of global warming while outlining the enormous risks but also the enormous opportunities confronting the world.”

Mr. Steiner emphasized the importance of building on the momentum they have helped to build through “negotiations on a decisive, post 2012 emissions reduction agreement” at the Bali meeting.

Established in the late 1980s by UNEP and the World Meteorological Organization of the UN, the IPCC and its more than 2,000 scientists and experts have grappled with the science; the likely impacts of climate change and the economics.

The IPCC has “outlined the impacts, from the melting off glaciers in the Himalayas to more frequent and devastating floods in New York to Bangladesh impacts, not in some far away future but in the life-time of people reading and hearing the announcement off the Peace Prize Committee,” Mr. Steiner said.

He noted that the IPCC has also calculated the price of peace and stability on this planet at perhaps 0.1 per cent of global GDP a year for 30 years for combating climate change and avoiding instability, rising tensions and conflict.

“The IPCC, in validating the climate science, represents one of the most important contributions the UN has made in its history to humanity and its current and future choices,” declared Mr. Steiner.

He recalled that UNEP earlier this year named Mr. Gore a UNEP Champion of the Earth for “making environmental protection a pillar of his public service and for educating the world on the dangers posed by rising greenhouse gas emissions.”