OHCHR/Anthony Headley
Residents are bracing for a winter without power in Bucha, Ukraine.

Nine months after Russia invaded Ukraine, rural households are increasingly forced to scale down or abandon agricultural activities, according to a new survey released on Wednesday by the Food and Agriculture Organization (FAO).

The findings revealed that one in every four of the 5,200 respondents had reduced or stopped agricultural production because of the conflict.

“The report indicates that 25 per cent of the Ukrainian rural population involved in agriculture stopped their activities or reduced their output due to the war”, said Pierre Vauthier, head of FAO’s Ukraine Country Office.

#Ukraine: after nine months of war, rural households are increasingly affected by the conflict with many forced to scale down or abandon agricultural activities - new @FAO survey reveals.

“The situation is much worse in the most agriculture-dependent regions of Ukraine, where over 40 per cent of rural families are affected”.

Rural households were interviewed to enhance understanding of the current agriculture and livelihoods situation and needs, particularly in view of the upcoming winter season.

The impact of the war on the broader production system, characterized by disruptions to value and supply chains, and price volatility, has had repercussions on the rural population, underlining their interdependence with the country’s agricultural economy.

“Ukraine’s agriculture sector is an important source of livelihoods for the roughly 13 million Ukrainians living in rural areas. While around two-thirds of agricultural production is made by enterprises, rural households produce around 32 per cent”, Mr. Vauthier reminded.

While the effects of the war are more prominent along the frontline, the rest of the country also feels the ramifications.

And as the war persists, the current situation is likely to deteriorate further.

Compounded by the winter season and the potential for further internal displacements to rural areas, the coping capacities of the rural population are likely to become progressively strained.

It is critical to protect those households from the further deterioration of their productive capacities, which are the foundations of their resilience.

“The report focuses on those households mostly involved in backyard farming and small-scale agricultural production”, said Lavinia Antonaci, coordinator of the assessment.

“Although not officially defined as farmers, they play a pivotal role in ensuring the food security, incomes and livelihoods of rural populations by providing for their own food consumption as well as selling products locally, thus contributing to local supply chains”.

The report notes that support to rural household food production is a means to mitigate the negative impacts of the war on their food security and livelihoods, and will also improve and maintain the hosting capacities of rural households.

Revitalizing and sustaining the small-scale agriculture sector will strengthen and secure the contribution of rural households to the broader agricultural system and enhance the benefits they can access in return.

© UNICEF/Tetyana Bundzylo
A six-year-old girl waits at a checkpoint in the newly liberated city of Lyman, in the Donetsk region of Ukraine, to receive lifesaving supplies, including water and food.

In addition, it is critical to monitor the constantly changing situation and to continue providing complementary assessments and integrated analyses on the impact of the war on Ukraine’s agricultural system to better inform short-, medium- and long-term actions.

Meanwhile, as temperatures slide down to -10⁰ C and attacks continue on power supply and heating systems, data collected by the International Organization for Migration (IOM) shows that only seven per cent of respondents nationwide are actively considering leaving their location.

Even in the event of prolonged cuts to all key utilities with no repair timeline, two out of three say that they would remain.

At the same time, private resources for survival are becoming scarce, as 43 per cent of all Ukrainian households have exhausted their savings.

Making sure people in #Kherson had water, food, medicines &amp; a warm place to stay has been a priority for @UN agencies in Ukraine in the past month. Today Mayor Luhova &amp; Governor Yanushevych thanked @UNReliefChief for their help &amp; emphasised how vital it is to sustain this support https://t.co/HiC9oVpSKF

To reduce costs, 63 per cent of respondents reported that they are rationing their gas, electricity, and solid fuel.

“We must support them during winter, particularly those with no access to shelter or heat. IOM urges stakeholders to scale up their efforts as the needs keep growing with each passing day.”

He noted that what he saw after attacks in Kherson and Kyiv was just a fraction of what the Ukrainian people are experiencing and highlighted the heavy toll of the war on civilians, which has left more than 18 million people in need of humanitarian assistance.

For its part, the UN Children’s Fund (UNICEF) warned that a bleak winter will likely worsen the psychosocial situation for children, who are already facing a looming mental health crisis, with an estimated 1.5 million of them at risk of depression, anxiety, post-traumatic stress disorder and other mental conditions. 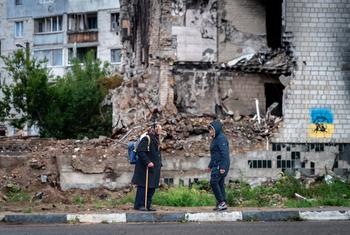 The war in Ukraine is a “relentless humanitarian nightmare” said the UN chief on Tuesday, warning that the death and destruction afflicting civilians there will take years to overcome, and rebuild. 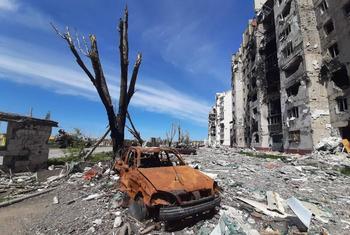 The only way to end the suffering and devastation in Ukraine, “is by ending the war”, the UN’s top disarmament official told the Security Council on Friday.