The UN High Commissioner for Refugees, Filippo Grandi, on Friday called for stronger political commitment and action to improve the lives of the roughly 4.3 million stateless people worldwide who are “languishing without citizenship and living in the shadows.”

Statelessness is “a pervasive and grave human rights violation”, as well as “a blight on humanity”, he said.

😷 Global pandemic
🌍 Climate change
⚔️ War &amp; Conflicts
As the world faces complex challenges, having a nationality, and all the rights and protections that emanate from it, is essential. #EndStatelessness #IBelong https://t.co/8EXZ5gWiT7

“Deprived of the fundamental right to a nationality, those who have been born or left stateless face a devastating legal limbo. They are prevented from accessing their basic human rights and from fully participating in society. Their lives are marked by exclusion, deprivation, and marginalization.”

Mr. Grandi made the appeal as Friday marked the eighth anniversary of #IBelong, a campaign launched by the UN refugee agency, UNHCR, aimed at ending stateless within a decade, or by 2024.

Progress has been made in the interim.  Nearly 450,000 stateless people either have acquired nationality or had their nationality confirmed.

Additionally, tens of thousands of people across Asia, Europe, Africa, and the Americas now have a pathway to citizenship thanks to newly enacted legislative changes.

While most people probably take their nationality for granted, not having papers can make life difficult - something Linda, now in her 30s, has known most of her life.

Although she was born in Moscow, Linda did not have Russian citizenship.  Her mother, who was from the Middle East, had come to the country to study journalism.  Because she was stateless, Linda had the same status too.

Without papers, Linda could not open a bank account, rent an apartment, or even buy a SIM card for her phone.

“On November 10, 2018, I received a notification letter that I was granted Russian citizenship. It was a very emotional moment … I felt that now I definitely exist,” she told UNHCR in an interview, several years after becoming a citizen.

The UN agency reported on other steps and solutions since the #IBelong campaign was launched.

Three countries have reformed gender discriminatory nationality laws - a root cause of statelessness.  However, 24 governments continue to deny women equal rights to grant nationality to their children, on the same basis as men.

Furthermore, progress to end statelessness continues to come up against other obstacles, UNHCR said, often rooted in discrimination based on race, religion or ethnicity.

“While statelessness remains a global problem, with many different causes, it is one that can be remedied through, often very simple, local solutions,” said Mr. Grandi.

“I appeal to governments and legislators around the world to use the next two years of the campaign to accelerate action and close the legal and policy gaps that continue to leave millions of people behind.” 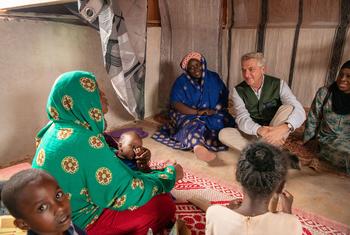 Responses to climate change must also consider its link to both conflict and the displacement it causes, UN High Commissioner for Refugees, Filippo Grandi, said in a briefing to the Security Council on Wednesday.