© UNICEF/Jannatul Mawa
Youth activists sit in the street as a form of strike in solidarity with the Global Climate Strike in Bangladesh.

While plans submitted by most signatories of the Paris Agreement would reduce global greenhouse gas emissions, they are still not ambitious enough to limit global temperature rise to 1.5 degrees Celsius by the end of the century, a new report by UN Climate Change (UNFCCC) warned on Wednesday.

The current combined National Determined Contributions (NDCs)—meaning the countries’ national efforts to tackle emissions and mitigate climate change—are leading our planet to at least 2.5 degrees warming, a level deemed catastrophic by scientists at the Intergovernmental Panel on Climate Change (IPCC).

Increasing instead of decreasing

In 2019, the IPCC indicated that to curb global warming, CO2 emissions needed to be cut by 43 per cent by 2030, compared to 2010 levels, but current climate plans show a 10.6 per cent increase instead.

However, this is an improvement compared to last year’s report, which showed a 13.7 per cent increase by 2030, and a continued raise of emissions after 2030.

“The downward trend in emissions expected by 2030 shows that nations have made some progress this year,” said Simon Stiell, Executive Secretary of UN Climate Change.

“But the science is clear and so are our climate goals under the Paris Agreement. We are still nowhere near the scale and pace of emission reductions required to put us on track toward a 1.5 degrees Celsius world”, he warned.

Mr. Stiell underscored that national governments need to strengthen their climate action plans now and implement them in the next eight years.

© Unsplash/Ella Ivanescu
Fossil fuel power plants are one of the largest emitters of the greenhouse gases that cause climate change.

Last year, during the UN Climate Change Conference COP26 in Glasgow, Scotland, all countries agreed to revisit and strengthen their climate plans, however, only 24 out of 193 nations submitted updated plans to the UN.

“...It’s disappointing. Government decisions and actions must reflect the level of urgency, the gravity of the threats we are facing, and the shortness of the time we have remaining to avoid the devastating consequences of runaway climate change”, highlighted the UN Climate Change chief.

The good news is that most of the nations who submitted a new plan strengthened their commitments, demonstrating more ambition in addressing climate change, according to the agency, which deemed this fact as a “glimmer of hope”.

“This is a strong signal that the world is starting to aim for net-zero emissions”, the agency said.

Nevertheless, experts note that many net-zero targets remain uncertain and postpone into the future critical action that needs to take place now.

A call for global leaders

In less than two weeks, the UN Climate Change Conference COP27 will take place in Sharm el-Sheikh, Egypt, and Mr. Stiell called on governments to revisit their climate plans and make them stronger to close the gap between where emissions are heading and where science indicates they should be this decade.

“COP27 is the moment where global leaders can regain momentum on climate change, make the necessary pivot from negotiations to implementation and get moving on the massive transformation that must take place throughout all sectors of society to address the climate emergency,” he said.

Stiell urged national governments to show at the conference how they will put the Paris Agreement to work through legislation, policies and programs, as well as how they will cooperate and provide support for implementation.

He also called for nations to make progress in four priority areas: mitigation, adaptation, loss and damage, and finance. 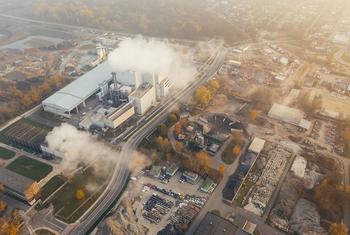 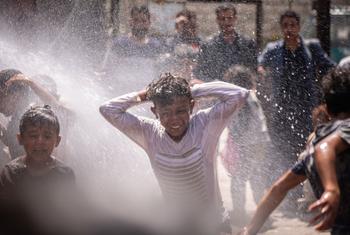 Heatwaves to impact almost every child on earth by 2050: UNICEF report

Heatwaves have become an unavoidable health hazard for many nations, but new data indicates that they are set to affect virtually every child on earth by 2050, the UN Children’s Fund, UNICEF, warned on Tuesday.