© Unsplash/Marcin Jozwiak
Fossil fuel power plants are one of the largest emitters of the greenhouse gases that cause climate change.

The agency’s yearly Greenhouse Gas Bulletin warns of the biggest year-on-year jump in methane concentrations in 2021 since systematic measurements began nearly 40 years ago.

While the reason for the unprecedented increase is still unclear, it seems to be a result of both biological and human-induced processes according to the report.

The increase in carbon dioxide levels from 2020 to 2021 was also larger than the average annual growth rate over the last decade, and according to WMO, the levels continue to rise through 2022.

“[The report] has underlined, once again, the enormous challenge – and the vital necessity – of urgent action to cut greenhouse gas emissions and prevent global temperatures from rising even further in the future,” said WMO Secretary-General Petteri Taalas.

A human hand in the planet’s warming

The report explains that between 1990 and 2021, the warming effect on our climate (known as radiative forcing) by long-lived greenhouse gases (those that stay in the atmosphere) has risen by nearly 50 per cent, mainly fuelled by a CO2 increase.

To be more specific, CO2 concentrations last year reached 415.7 parts per million (ppm), methane 1908 ppm, and nitrous oxide 334.5 ppm.  These values constitute, respectively, 149 per cent, 262 per cent and 124 per cent of pre-industrial levels before human activities started disrupting the natural balance of these gases in the atmosphere.

“The continuing rise in concentrations of the main heat-trapping gases, including the record acceleration in methane levels, shows that we are heading in the wrong direction,” Mr. Talas underscored.

World Bank
Landfills are a major source of methane emissions, and improved management can capture the methane as a clean fuel source as well as reducing health risks. Photo: World Bank/Curt Carnemark

The call to global leaders at COP27

For WMO’s chief, the report highlights the importance to implement without delay the cost-effective strategies already available to tackle methane emissions, as well as to slash CO2 by transforming our industrial, energy and transport systems.

“The needed changes are economically affordable and technically possible. Time is running out,” he reiterated.

The agency hopes that the science included in this Bulletin, and the State of the Global Climate report to be published in the eve of the UN Climate Conference COP27 in Egypt, will help galvanize negotiators into more ambitious action to achieve the Paris Agreement goal to preferably limit global warming to 1.5 degree Celsius.

WMO warns that as long as emissions continue, global temperature will continue to rise. Given the long life of CO2 in the atmosphere, the temperature level already observed will persist for decades even if emissions are rapidly reduced to net zero.

Scientists point out that it is also important to understand that this report is measuring the concentrations of greenhouse gases, meaning what remains in the atmosphere after gases are absorbed by sinks, like the ocean and biosphere, which are not the same as emissions.

The Bulletin explains that after COVID-related lockdowns in 2020, global CO2 emissions have rebounded, primarily from fossil fuel and cement production.

Of the total emissions from human activities during the 2011–2020 period, about 48 per cent accumulated in the atmosphere, 26 per cent in the ocean and 29% on land.

Experts warn that there is concern that the ability of land ecosystems and oceans to act as sinks may become less effective in future, thus reducing their ability to absorb carbon dioxide and act as a buffer against larger temperature increases. In some parts of the world, previously carbon-absorbing land has started to emit the gas back to the atmosphere.

UNDP China
An aerial view of wetlands in China.

Methane is the second largest contributor to climate change and consists of a diverse mix of overlapping sources and sinks, so it is difficult to quantify emissions by source type, scientists explain.

Since 2007, global methane concentration has been increasing at an accelerating rate. The annual increases in 2020 and 2021 are the largest since systematic registry began in 1983.

However, scientists still don’t know what the causes of this increase are, but some research indicates that a large amount of this methane is coming from “biogenic sources”, such as wetlands and rice paddies.

A possibility explored by the bulletin is called “climate feedback”, meaning that as it gets warmer, organic material decomposes faster in tropical wetlands, increasing emissions.

FAO/Giulio Napolitano
Women of the Batwa community tilling the soil with hoes in preparation for planting potatoes, in Gashikanwa, Burundi.

Finally, nitrous oxide is emitted into the atmosphere from both natural sources (57 per cent) and anthropogenic sources (approximately 43 per cent), including oceans, soils, biomass burning, fertilizer use, and various industrial processes.

The increase from 2020 to 2021 was slightly higher than that observed from 2019 to 2020, and higher than the average annual growth rate over the past 10 years, WMO underscores.

Currently, WMO is working with the broader community to develop a framework for sustained, internationally coordinated global greenhouse gas monitoring. 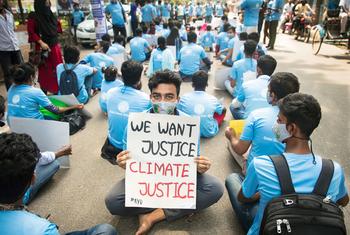 While plans submitted by most signatories of the Paris Agreement would reduce global greenhouse gas emissions, they are still not ambitious enough to limit global temperature rise to 1.5 degrees Celsius by the end of the century, a new report by UN Climate Change (UNFCCC) warned on Wednesday. 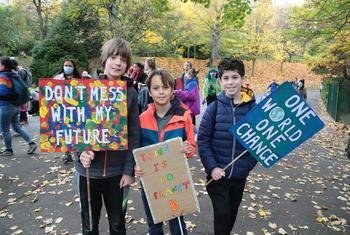 8 reasons not to give up hope - and take climate action

Although once again the scientific community has made clear this week that we are not doing enough to limit global warming to the crucial 1.5°C threshold, the findings of the latest Intergovernmental Panel of Experts on Climate Change report, are not all doom, and gloom.