Israel’s occupation of Palestinian territory is unlawful under international law due to its permanence and the Israeli government’s de facto annexation policies, a UN-appointed Commission of Inquiry said in its first report, published on Thursday.

The three-member Commission is pushing for the issue to be referred to the International Court of Justice (ICJ), the UN’s highest court.

The Commission of Inquiry on the Occupied Palestinian Territory, including East Jerusalem, and in Israel issues its first report to the @UN General Assembly.

The Commission will present its report to #UNGA on 27 October 2022 https://t.co/NB82aEMAvE

They stressed that under international humanitarian law, the occupation of territory in wartime is a temporary situation and does not deprive the occupied power of its statehood or sovereignty.

“Recent statements by the Secretary-General and numerous Member States have clearly indicated that any attempt at unilateral annexation of a State’s territory by another State is a violation of international law and is null and void; 143 member States including Israel last week, voted in favour of a General Assembly resolution reaffirming this,” said Navi Pillay, the Commission Chair.

“Unless universally applied, including to the situation in the Occupied Palestinian Territory, this core principle of the United Nations Charter will become meaningless”, she added.

The Commission has called on the UN General Assembly to request an urgent Advisory Opinion from the ICJ on the legal consequences of the occupation.

For their report, the Commissioners reviewed the policies and actions Israel has used to maintain the occupation and annex parts of the Occupied Palestinian Territory.

They focused on how Israel has sustained and advanced its “settlement enterprise”, including statements made by Israeli officials indicating the intent to maintain permanent control over the land in violation of international law.

The Commission concluded that by continuing to occupy the territory by force, Israel incurs international responsibilities and remains accountable for violations of the rights of the Palestinians, both individually and as a people.

“By ignoring international law in establishing or facilitating the establishment of settlements, and directly or indirectly transferring Israeli civilians into these settlements, successive Israel governments have set facts on the ground to ensure permanent Israeli control in the West Bank,” said Ms. Pillay.

The Commission also reviewed Israel’s expropriation and exploitation of land and natural resources, and its restrictive urban planning and zoning policies in the West Bank.

Land is often confiscated for military purposes but then used for settlement construction, the report found.

The Commission reviewed statements by Israeli officials indicating that Palestinian construction is seen as an impediment to settlements, requiring action such as confiscation, demolitions and displacement.

Similar processes were also seen in East Jerusalem, where restrictive planning and zoning have contributed to shrinking space for Palestinians.

The report also addresses Israeli Government policies that have had an impact on all aspects of Palestinian life, such as access to clean and affordable water.

“There is so much ‘silent harm’ and psychological trauma, that may not be immediately apparent, resulting from the erosion of economic, social and cultural rights. These debilitating processes have severe short and long-term consequences and must be urgently addressed”, said Commissioner Miloon Kothari.

The Commission also examined how the occupation and de facto annexation policies have affected Palestinian human rights, as well as the impacts on Palestinian women and children.

The “coercive environment” which forces Palestinians to leave their homes has fragmented Palestinian society and hampered the right to self-determination, the report said.

The report concludes by saying that some of the Israeli government policies and actions may constitute “elements” of crimes under international criminal law, including the war crime of transferring part of your own civilian population into occupied territory.

“The actions of Israeli Governments reviewed in our report, constitute an illegal occupation and annexation regime that must be addressed,” said Commissioner Chris Sidoti.

“The international system and individual States must act and uphold their obligations under international law. That must begin at this session of the General Assembly with a referral to the International Court of Justice.”

About the Commission of Inquiry

The Independent International Commission of Inquiry on the Occupied Palestinian Territory, including East Jerusalem, and Israel, receives its mandate from the UN Human Rights Council.

The Commissioners are not UN staff and they are not paid for their work.

They will present their report to the UN General Assembly on 27 October. 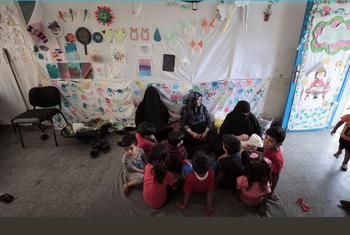