UNICEF/Ahed Izhiman
Eight-year old Hamid looks out over the old city of Hebron from the roof of his house in Palestine.
31 January 2020
Human Rights

A United States plan released this week to resolve the decades-long conflict between Israelis and Palestinians is “lopsided” and will only entrench occupation, an independent UN human rights expert said on Friday.

President Donald Trump announced his administration’s ‘Vision for Peace, Prosperity and a Brighter Future’ at the White House on Tuesday, which would legalize Israeli settlements in the West Bank and East Jerusalem. Israel also would be allowed to annex around 30 per cent of the West Bank.

The Trump plan on the #Israeli-#Palestinian conflict is a lopsided proposal entirely in favour of one side to the conflict – UN expert Michael Lynk: "a one and a half state solution" that will entrench occupation 👉 https://t.co/zQteaqOnkm#StandUp4HumanRights pic.twitter.com/h3lgR2YcCx

In response, the UN underlined its longstanding commitment to realizing a two-State solution, with Israelis and Palestinians “living side by side in peace and security, within recognized borders, on the basis of the pre-1967 lines.”

However, what the US plan offers is “a one and half state solution”, according to Michael Lynk, the UN Special Rapporteur on the situation of human rights in the occupied Palestinian territory.

“This is not a recipe for a just and durable peace but rather endorses the creation of a 21st century Bantustan in the Middle East”, he said, referring to the homelands established for black South Africans during the apartheid era.

“The Palestinian statelet envisioned by the American plan would be scattered archipelagos of non-contiguous territory completely surrounded by Israel, with no external borders, no control over its airspace, no right to a military to defend its security, no geographic basis for a viable economy, no freedom of movement and with no ability to complain to international judicial forums against Israel or the United States.”

Mr. Lynk deplored the proposal to legalize Israeli settlements, and he urged countries to condemn any call to annex Palestinian territory, which is prohibited under international law.

“This unilateral act undermines the Palestinians’ right to self-determination, and it threatens to drag the world back to darker times, when conquest was acceptable, borders could be redrawn and territorial integrity was regularly undermined”, he stated.

Under the Trump plan, Jerusalem would remain Israel’s undivided capital, which, Mr. Lynk called distressing as it “recognizes the conquest and illegal annexation of East Jerusalem, which remains occupied territory under international law, as embedded in scores of United Nations resolutions”.

The rights expert also took issue with proposals that would prevent Palestinian refugees from returning to their homes in Israel.

“Nothing in the Trump plan alters the continuing prevalence of the laws of occupation, the human rights of the Palestinians under occupation, and the absolute obligation on the international community to redouble its efforts to achieve a just, equitable and durable solution on the basis of equal rights for Palestinians and Israelis alike,” said Mr. Lynk.

“International law remains the Northern Star, the only guide to a sustainable peace.”

Independent experts and Special Rapporteurs and are appointed by the Geneva-based UN Human Rights Council to examine and report back on a specific human rights theme or a country situation. The positions are honorary and the experts are not UN staff, nor are they paid for their work.

Recent heightened tensions in the Middle East underscore the critical need for dialogue and diplomacy in the region, the UN’s Political Affairs chief told the Security Council on Tuesday. 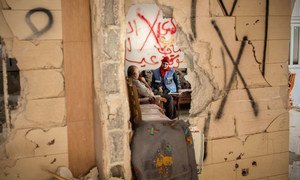