© WFP/Mohammed Awadh
The conflict in Yemen has wreaked havoc on civilians.

New uncertainty and “a heightened risk of war” now prevails across Yemen, following the end of a long truce which brought significant dividends, the UN Special Envoy Hans Grundberg told the Security Council on Thursday.

He told ambassadors that since the truce began, six and a half months ago, it had started to alleviate the suffering of Yemenis, after more than seven years of civil war, and offered “a truly historic opportunity” to work towards a lasting settlement.

But the period of relative peace between internationally recognized Government forces and Houthi rebels ended 11 days ago, and now both must choose to either “preserve and build on the truce”, or return to war.

UN Envoy to #UNSC “This Council’s united position on the renewal and expansion of the truce has made it clear that the international community expects the parties to reach an agreement with a sense of urgency.”

“The achievement and benefits of the truce should not be underestimated”, he said, flagging that it brought “the longest period of calm yet”.

Mr. Grundberg said during the pause in fighting, there had been no major military operations, and a 60 per cent decrease in casualties.

Over 1.4 million metric tonnes of fuel had been delivered to the crucial Hudaydah ports on the Red Sea; and there had been UN-brokered face-to-face meetings on military de-escalation.

“It is important to remember that the truce was never intended as an end in itself, but as a building block to enhance trust between the parties and establish a conducive environment to work toward a political solution to the conflict”, the UN envoy reminded.

The UN official informed the ambassadors of his relentless efforts to engage the parties as well as regional and international partners on renewal options, highlighting discussions in Abu Dhabi and Muscat.

“I personally believe that there is still a possibility for the parties to come to an agreement”, Mr. Grundberg said.

“With the stakes this high, it is critical that we do not lose this opportunity. The parties need to demonstrate the leadership, compromise and flexibility required to urgently reach an agreement on the renewal and expansion of the truce”.

The Special Envoy thanked the Council for its continued steadfast support and maintained that its united position on the renewal and expansion of the truce “has made it clear that the international community expects the parties to reach an agreement with a sense of urgency”.

“Landmines and other explosive hazards have continued to be the main cause of civilian casualties”, she said, noting that last month 70 people were reportedly killed or injured by landmines, improvised explosive devices and unexploded ordnance.

But the impacts go far beyond killing and maiming, “they convert simple everyday activities, like farming, fishing or walking to school, into possible life-or-death scenarios,” she added.

“We need urgent action to reduce this threat, including increased support for demining projects and facilitation of the importation of equipment”, she underscored.

UNHCR/Hugh Macleod
In Mazrak, Yemen, a five year-old girl, diagnosed as malnourished, is given a pink wristband to wear to show she has not been getting enough to eat.

At the same time, she told the Council the country’s deteriorating economy and collapsing basic services were triggering other perils.

Over the past six days, Ms. Msuya said she had seen first-hand, markets without food and basic goods, and hospitals and schools lacking fundamental equipment, with “doctors and teachers who are not being paid enough – if at all”.

“Humanitarians are doing their best to address the most urgent needs, but we cannot do this alone, and we cannot substitute the roles of others”, she stated, requesting support from donors, development actors and international financial institutions “to turn this tide and chart a path forward”. 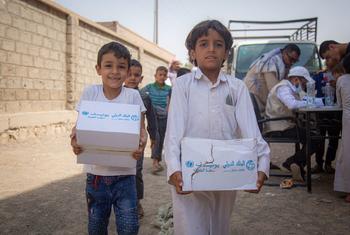 Yemen’s warring parties who have sustained a nationwide truce for the past six months, need to prioritize the “needs and aspirations” of the people, by both extending and expanding it, beyond Sunday’s imminent deadline, the UN chief has said. 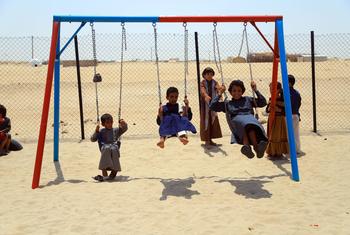 Yemen: UN envoy underscores need to ‘end the conflict, not merely manage it’

The Security Council has a joint responsibility to help Yemen take the “necessary and decisive steps towards peace,” the country’s UN Special Envoy told the ambassadors on Monday.