© UNICEF/Asad Zaidi
A flooded village in Matiari, in the Sindh province of Pakistan.

The scale of the humanitarian crisis in Pakistan is unprecedented, with a third of the country under water, UN humanitarians warned on Friday.

With more than 33 million people impacted, that represents 15 per cent of the total Pakistani population, said Dr. Palitha Mahipala, World Health Organization (WHO) Representative in the country.

Some “6.4 plus million people are in dire need of humanitarian aid”, he said, speaking from Islamabad to journalists in Geneva.

In the past few weeks, record monsoon rains dumped more than five times the 30-year average for rainfall in some provinces, killing more than 1,200 people and injuring over 6,000 since June. Nearly 400 children are among the fatalities.

🔴Due to ongoing severe floods in #Pakistan, over 1460 health facilities 🏥 have been affected of which 432 were fully damaged.🟢@WHO's leading the health response and operating on the ground in over 4500 medical camps. pic.twitter.com/XQKxkeUtZJ

More than a million homes lost

With 1.1 million houses washed away and vital infrastructure destroyed such as schools, UNICEF’s Representative in Pakistan, Abdullah Fadil, explained that “18,000 schools have been destroyed and thousands of schools are now fully shuttered… So that means children who have lost education for two years are also losing learning opportunities now.”

Besides the massive disruption to the education system, health facilities have been heavily impacted too, leaving the most vulnerable at risk.

The timing couldn’t be worse, as aid agencies have warned of an uptick in waterborne and deadly diseases, such as diarrhoea, cholera, dengue, or malaria.

Pakistan already had a high level of stunting, and the areas where that’s a major health issue, “are the same areas that are now flooded,” said Mr. Fadil. “The anticipation list of waterborne diseases - diarrhea, cholera, all the diseases you can imagine - will hit, and quite soon, so we need to be in place to respond to those as well.”

As rains continue and flooding likely worsens over the coming days, there is an urgent need to scale up disease surveillance, restore damaged health facilities, ensure sufficient medicines and health supplies to affected communities.

“Affected people have told our staff on the ground about their traumatic and scarring experiences as rain and floodwaters swept away their possessions in minutes,” said Matthew Saltmarsh, spokesperson for the UN Refugee Agency.

“Those who could, rushed to safety on higher ground without being able to rescue their belongings. Shelter, clean drinking water and food are among the most urgently needed items in the aftermath of the flood.”

Torrential monsoon rainfall has caused the Indus River to overflow, submerging land for tens of kilometers wide, according to recent images from the European Space Agency.

Crops and livestock have been lost having a significant impact on both livelihood and nutrition of afflicted communities.

WFP/Kapil Dev
WFP is on the ground in Sanghar, Sindh, registering those affected by the severe floods for food distribution.

“We have a major problem within the region and a particular global challenge in ensuring that the support that is going to be necessary to get agricultural production back up and running in Pakistan, to feed its own people, as well as being the continued source of supply of food for colleagues and brethren next door in Afghanistan,” alerted Chris Kaye, WFP’s Country Director for Pakistan.

Neighboring Afghanistan has also been hard-hit by the flooding which has come as the country struggles to recover from a series of natural disasters.

Millions have found refuge in Pakistan over the last 40 years, noted Mr. Matthew Saltmarsh. “Pakistan and its people have hosted millions of Afghan refugees for over four decades, with some 1.3 million registered now in the country, as well of course as large numbers of undocumented Afghans.”

© UNICEF/Asad Zaidi
A flooded village in Matiari, in the Sindh Province of Pakistan.

Pakistan, which is already facing political and economic turmoil, has been thrown into the front line of the human-induced climate crisis. The South Asian country of 220 million people faced dramatic weather conditions this year, from record heatwaves to deadly floods. "South Asia is one of the world's global climate crisis hotspots.

Pakistan is home to more glaciers than anywhere outside the polar areas. Global warming makes the country more vulnerable to sudden outbursts of melting glacier water, according to the Meteorological Department in Islamabad.

The head of the UN reproductive health agency, UNFPA, Natalia Kanem, issued a statement on Friday stressing that of the 33 million affected, some 650,000 are pregnant women.

"We are deeply saddened by the destruction, and are working with the Government, our United Nations and NGO partners to support the humanitarian response and secure a speedy recovery from this disaster."

The head of the UN reproductive health agency, UNFPA, Natalia Kanem, issued a statement on Friday stressing that of the 33 million affected, some 650,000 are pregnant women.

"We are deeply saddened by the destruction, and are working with the Government, our United Nations and NGO partners to support the humanitarian response and secure a speedy recovery from this disaster." 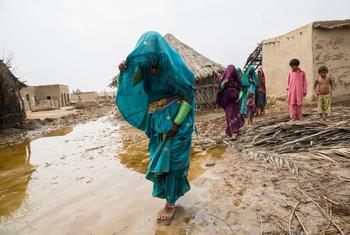 Major health risks are unfolding in Pakistan as unprecedented flooding continues, the World Health Organization (WHO) reported on Wednesday, warning of the threat of further spread of malaria, dengue fever and other water and vector-borne diseases. 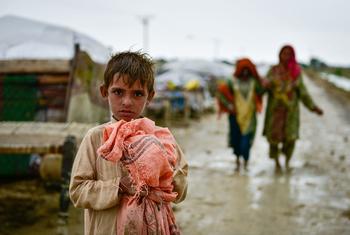 A $160 million emergency plan to help Pakistan deal with devastating flooding has been launched by the United Nations, aiming to reach “5.2 million of the most vulnerable people in the country”.