UNDP/Yulia Samus
A specialist from the UN Development Fund (UNDP) meets in Ukraine with a person with disabilities and others.

The current humanitarian crisis stemming from Russia’s invasion of Ukraine is having “a disproportionate impact” on persons with disabilities, especially children in institutions there, four UN-appointed independent human rights experts said on Thursday.

“The terrible tragedy of war highlights historic policy choices made in the past that badly affect children with disabilities,” the Special Rapporteurs said.

The independent experts flagged that “Ukraine faces the daunting task of reinventing many of its social and economic systems when this war is finally brought to an end”.

🇺🇦#Ukraine: UN experts express concern about the situation of #children with disabilities placed in institutions &amp; being displaced to other institutional settings either within Ukraine or further afield.👉https://t.co/nXLZAQYayM pic.twitter.com/1DExluje2b

The experts raised the alarm over inadequate services for children with disabilities and the impact that the armed conflict is having on key services, both within Ukraine as well as the immediate region.

Highlighting that thousands of children with disabilities have been sent back to their places of origin without first determining whether the environments are safe, they warned that this practice may endanger the youth, including by instances of abuse and trafficking.

“We fully understand the exigencies of war and the immediacy of the hard choices to be made. But this is not a situation that can be allowed indefinitely,” they upheld.

Citing their displacement from one facility to another, the experts observed that the chilcren who had remained in institutions are experiencing a decline in their health and well-being.

And adding to the already known problems of neglect, abuse, physical restrictions, and access to basic services – including education and healthcare – a lack of information on their whereabouts is preventing families from restoring contact.

“Cross institutionalization cannot be a strategy for the future,” warned the Special Rapporteurs.

Another concern raised by the experts is that Ukraine seems to require third countries receiving children with disabilities to place them in facilities – even States that have successfully moved away from institutionalization for their own citizens.

“Third countries have a heavy responsibility to assist Ukraine imagine a better future for its citizens with disabilities which include its children,” they said.

The UN experts expressed hope that when reconstruction and future development for Ukraine is being funded, investments will be made to build community support that will enable children with disabilities to flourish with their families and in family-like situations as opposed to institutions.

“It is our earnest hope that Ukraine will commit itself to a better future for persons with disabilities, especially children,” the experts said.

“For our part, we stand ready to provide our advice, solidarity and support to Ukraine on this matter”.

In closing the experts strongly reiterated their “many previous calls” on Russia to “immediately end its aggression against Ukraine” and pledged to assist Ukraine “build a better future for its citizens with disabilities”.

Click here for the names of those who participated in the statement. 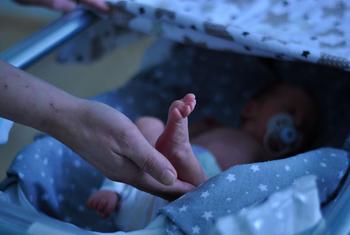 The war in Ukraine is increasing the risks of premature births and causing babies to need more oxygen, the spokesperson for a UN-backed global health initiative told the World Health Organization (WHO) on Tuesday in Geneva.