Strengthening accountability and justice for serious violations of international law, including genocide, war crimes, and crimes against humanity, was the focus of debate in the UN Security Council on Thursday.

Ambassadors were briefed by the President of the UN’s highest court, the UN human rights chief, and an Oxford University law professor, who advocated for the adoption of a convention on the prevention and punishment of crimes against humanity.

"Placing victims at the centre of accountability strategies will contribute to justice efforts" –@mbachelet at the #UNSC.Victims' voices, in all their diversity, must be heard.👉https://t.co/H8uN7odcvX pic.twitter.com/zeF1frDmZN

A draft developed by the International Law Commission, a UN expert body, is currently under consideration by the General Assembly.

“Adoption of a convention on crimes against humanity would be one way to promote accountability for violations of some of the most fundamental obligations found in international law,” said Judge Joan E. Donoghue, President of the International Court of Justice (ICJ).

“The Court stands ready to decide any disputes over which it would have jurisdiction on the basis of such a convention.”

The ICJ, which is known as the world court, settles legal disputes submitted to it by countries, and its judgements are binding. However, she said the Court must convince national governments that it has the jurisdiction to proceed.

The ICJ can consider claims, and any counter claims, if both parties recognize its jurisdiction, said Judge Donoghue, who spoke via videoconference from The Hague, in the Netherlands, where the Court is based.

In other cases, jurisdiction is limited, such as when clauses in particular international conventions – on genocide or racial discrimination, for example - have been invoked as the basis for jurisdiction.

“Today, when armed conflicts and mass atrocities continue to drive human suffering in various parts of the world, I take this opportunity to remind Member States that the Court can promote accountability only to the extent that Member States accord it the jurisdiction to do so,” she said.

The UN High Commissioner for Human Rights, Michelle Bachelet, called for enhancing the normative and institutional framework to further strengthen the legal basis for accountability and justice efforts.

“The adoption of a Convention on the Prevention and Punishment of Crimes against Humanity would, in my view, fill a significant gap in the current international framework, and facilitate international cooperation in this area,” she said, speaking from Geneva.

Relevant treaties which provide the jurisdictional basis for accountability deserve universal adherence, she added, and should be ratified by all States.

They include the Rome Statute, the 1998 treaty that established the International Criminal Court (ICC), which prosecutes war crimes, crimes against humanity and genocide.

Ms. Bachelet encouraged all States to accept the compulsory jurisdiction of the ICC “in the common interest of the entire international community”.

The UN Security Council’s support for independent and impartial investigation, justice and accountability efforts is essential, she added, while stressing the importance of putting victims at the heart of these efforts.

“This is not only the right thing to do, in acknowledgment of the victims in whose names these processes were created. But it also helps to identify and address the conditions that have led to the serious violations in the first place,” she said.

For Professor Dapo Akande of Oxford University, adoption of the draft convention “will ensure that the framework for punishing crimes against humanity is put on a similar level as that with respect to genocide and war crimes”.

Mr. Akande further stated that the focus for accountability is incomplete as the fourth international crime – aggression - often goes unaddressed.

“To improve the normative framework with regard to accountability for all international crimes, States should consider ratifying the amendments on the crime of aggression so as to allow the ICC to be able to exercise jurisdiction over the supreme international crime,” he said. 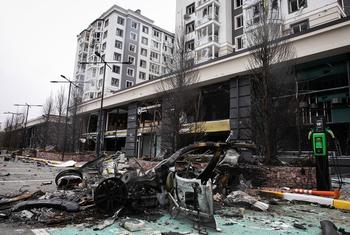