In Ukraine on Tuesday, UN humanitarians began to help the first evacuees arriving from Mariupol’s devastated Azovstal steel works, more than two months since Russia’s invasion began, and said that they would do everything possible to assist those still trapped.

“I'm relieved to confirm that the safe passage operation from Mariupol has been successful. “The people I travelled with told me heartbreaking stories of the hell they went through” tweeted Osnat Lubrani, the UN’s top aid official in Ukraine.

I'm relieved to confirm that the safe passage operation from Mariupol has been successful.The people I travelled with told me heartbreaking stories of the hell they went through.I'm thinking about the people who remain trapped. We will do all we can to assist them. pic.twitter.com/mEqTTKZKA8

Ms. Lubrani noted that 101 civilians had been evacuated from the steel plant and other areas in Mariupol, in an operation which began on Friday, coordinated by the UN and the International Committee of the Red Cross (ICRC), in line with commitments made following the UN chief's recent visit to Moscow and Kyiv.

UN Secretary-General António Guterres, said in a statement that he was pleased to receive news of the successful evacuation.

"I hope the continued coordination with Kyiv and Moscow will lead to more humanitarian pauses that will allow civilians safe passage away from the fighting and aid to reach people where the needs are greatest."

A tweet from OCHA on the ground confirmed the buses were on the move on Sunday, coordinated by the UN, the International Committee of the Red Cross (ICRC) and “parties to the conflict.”

Ahead of the Azovstal steel plant arrivals at Zaporizhzhia reception centre, Dr Dorit Nizan, World Health Organization (WHO) Incident Manager for Ukraine, reported seeing many other civilians from towns and villages on the outskirts of western Mariupol.

“We are already receiving people, mainly mothers and children from Mariupol and its vicinity,” she said. “Cars are coming with volunteers from the region here, Zaporizhzhia, that are driving them from the contact line.”

Before the Russian invasion on 24 February, Mariupol’s population numbered around 500,000. Today, around 100,000 are believed to remain in the battered city, the WHO official said.

Although the majority of these arrivals had only minor injuries which required medical care, mental health linked to the trauma of the war “is a big issue” which will require care and support in the longer term, the WHO official explained.

Since the start of the war, the UN health agency has delivered 382 tonnes of medical supplies to Ukraine, including 291 tonnes that have already reached beneficiaries. The agency has established hubs across the vast country, including in Lviv, Kyiv, Dnipro, Donetsk and Luhansk.

.@antonioguterres is pleased that more than 100 civilians have successfully been evacuated from the Azovstal steel plant in Mariupol, in an operation successfully coordinated by the @UN &amp; the @ICRC. https://t.co/NF0oEosYo4#Ukraine

“Many people left these regions because they are close to the contact line, and they are you know, under fight(ing) and shelling,” Dr Nizan said. “But many of the health workers stayed to deliver, to help, and those that left are replaced by other health care workers that came from the other areas that were occupied.”

Latest data from the WHO indicates that there have been 186 attacks on healthcare in Ukraine since 24 February, causing 73 deaths and 52 injuries. Heavy weapons were responsible for the vast majority.

According to news reports, the Russian bombardment of the steel plant resumed soon after the evacuation had left there, on Sunday, and Ukrainian authorities say that hundreds remain trapped there, while tens of thousands of civilians are trapped in other areas of the shattered city, unable to escape.

Briefing reporters based in New York, after having arrived with the convoy, Ms. Lubrani that she and the team had been making the evacuation arrangements for two days, prior to leaving, and confirmed that all the buses that had left the steel plant, had made it through to safety.

"This is a very complex and risky operation, so we couldn't prolong it, we couldn't just stay there. But we are ready to go back in."

She said that Russian forces had "screened" all the evacuees, who had been desperate to escape their underground bunkers after weeks, if not months, of being trapped underground. The UN and Red Cross personnel accompanying them had remained with the evacuees at all times during their hellish escape, she added.

Engagement between Russian and Ukrainian authorities and humanitarians including the UN and ICRC, "can be helpful, can be a bridge, to find a way to regularize some sort of safe passages, and pauses, that can save lives, and bring much needed assistance...That's what I hope we can do moving forward."

© UNOCHA/Kateryna Klochko
Civilians from Mariupol flee the Azovstal steel plant in Mariupol in a UN-led evacuation.
♦ Receive daily updates directly in your inbox - Subscribe here to a topic.
♦ Download the UN News app for your iOS or Android devices. 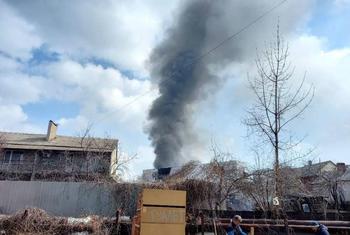 A United Nations and Red Cross (ICRC) operation to evacuate desperate civilians trapped in the Azovstal steel plant in the Ukrainian port city of Mariupol is underway, the Spokesperson for the humanitarian affairs office in the country confirmed on Sunday. 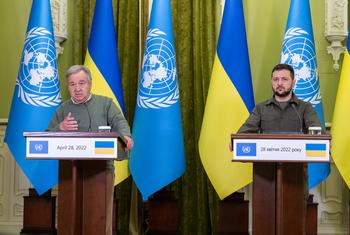 Describing Ukraine as “an epicenter of unbearable heartache and pain”, the UN chief took to the podium alongside its president in Kyiv on Thursday, vowing to increase support for the people amidst the suffering, and the millions displaced in the wake of Russia’s invasion.