UNDP Ukraine/Oleksandr Ratushnia
The village of Novoselivka, near Chernihiv in Ukraine has been bombed in the conflict with Russia.

Humanitarians have launched a renewed appeal for war-ravaged Ukraine that calls for $2.25 billion to provide assistance and protection to nearly nine million people, the UN announced on Monday.

The figure is more than double the initial appeal published just days after Russia invaded the country on 24 February.

The war in #Ukraine has left at least 15.7 million people in urgent need of life-saving assistance.Humanitarians need $2.25 billion to support 8.7 million of the most vulnerable people inside the country.https://t.co/PCpnlEbQm9

“Two months on, needs have continued to rise, while the humanitarian response has expanded significantly in scale and scope –  enabled by the rapid funding allocated against the initial Flash Appeal –  prompting a revision and extension of the Ukraine Flash Appeal until August 2022,” they wrote.

Ukraine has a population of 44 million, and the war has left some 15.7 million in need.

More than seven million are internally displaced while 5.2 million have crossed into neighbouring countries, such as Poland, and beyond.

The massive devastation of urban centres and the destruction of civilian infrastructure have severely disrupted healthcare and other critical services.

Last week, the UN Office in Ukraine reported that some 136 attacks on health care facilities have been recorded since the start of the war, representing nearly 70 per cent of worldwide attacks on the sector so far this year.

The updated flash appeal targets 8.7 million people, more than half of whom are women.

It is organized under five main strategies, which include delivering aid in the hardest-to-reach areas.  UN-led convoys have so far delivered supplies on five occasions, and more are planned in the coming weeks and months.

The plan further calls for providing assistance as close as possible to people in need, including supporting organizations working in areas under threat and ensuring supplies are available in the event pipelines are cut off.

Humanitarians are also scaling up cash transfers to displaced people, with the number of people reached rising from just under 18,500 to more than 263,000 in the past three weeks alone.

The appeal places people, gender equality and protection at the centre of the response, and includes measures aimed at enhancing accountability and preventing sexual exploitation and abuse.

Humanitarians also will ensure their work is principled, realistic and feasible, as well as suitable and accessible for all gender and age groups.

The revised plan comes ahead of the UN Secretary-General’s meetings this week with both the Foreign Ministers and Presidents of Ukraine and Russia.

UN chief António Guterres is travelling to Moscow, after having met with Turkish President Recep Tayyip Erdoğan in Ankara on Monday.

During the meeting, Mr. Guterres expressed his support for Turkey’s ongoing diplomatic efforts in relation to the war in Ukraine, Deputy UN Spokesperson Farhan Haq told journalists in New York.

“He and President Erdoğan reaffirmed that their common objective is to end the war as soon as possible and to create conditions to end the suffering of civilians.  They stressed the urgent need for effective access through humanitarian corridors to evacuate civilians and deliver much needed assistance to impacted communities,” said Mr. Haq.

The Secretary-General will have a working meeting and lunch with Russian Foreign Minister Sergey Lavrov on Tuesday, and will be received by President Vladimir Putin.

On Thursday he will have a working meeting with Ukraine’s Foreign Minister, Dmytro Kuleba, and will be received by the country’s President, Volodymyr Zelenskyy.

The Secretary-General will also meet with UN staff on the ground in Ukraine to discuss the scaling up of humanitarian assistance. 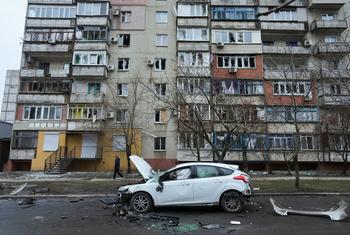 In efforts to end the war in Ukraine, Secretary-General António Guterres has written separate letters to the leaders of Russia and Ukraine to request meetings with them in their respective capitals, the United Nations said on Wednesday.