Decrying the erosion of democracy in Brazil, a UN expert has called for authorities to create and maintain a safe environment conducive to the exercise of the rights to peaceful assembly and association.

“I am concerned that in recent years there have been emerging trends limiting the enjoyment of these rights in all areas,” Clément Nyaletsossi Voule said on Monday in São Paulo, speaking at the end of a 12-day visit to South America’s largest country.

He also pointed to the appalling levels of violence against human rights defenders, women journalists, indigenous peoples, and traditional communities, particularly those of African descent which are known as quilombolas.

Mr. Voule is the UN Special Rapporteur on the right to peaceful assembly and freedom of association.

He also addressed the frequent excessive use of force by law enforcement, as well as human rights violations during protests.

“I am concerned that there is neither a clear unified protocol for the use of force during protests nor an effective and independent mechanism for the oversight of law enforcement agents’ conduct,” he said.

Political violence against social leaders, candidates and elected leaders -particularly those of African descent and trans women - poses a serious threat to political participation and democracy, he said.

With general elections scheduled for October, he called for the State to ensure that all electoral processes are non-discriminatory and free of misinformation, fake news and hate speech, he said.  Candidates must also be protected from any threats or attacks, both on and offline.

Mr. Voule has welcomed the openness and cooperation of federal and state authorities with UN human rights mechanisms, including the establishment of a Parliamentary Observatory on Universal Periodic Review (UPR).

During the UPR process, governments outline what they have done to improve the human rights situation in their territories.

While in Brazil, Mr. Voule travelled to the capital, Brasilia, and the cities of Rio de Janeiro and Salvador, in addition to São Paulo.

“I am impressed by the robust, active and diverse civil society in Brazil that has played a critical role in the fight for social justice, to preserve democracy and the rule of law, and, more recently, to fight COVID-19,” he said.

However, the rights expert was appalled by violence against activists, quilombolas (original Afro-Brazilian settlements), indigenous communities, and community leaders in favelas, which was motivated by structural factors such as racism.

Violence and discrimination against people who practice religions of African origin was another concern.

“I met collectives of mothers who want justice and accountability for the loss of their children. They are not asking for anything that is not already stated in Brazilian legislation, yet live under threats and in constant fear of violence,” he told reporters.

Mr. Voule was also deeply concerned that those behind the March 2018 execution of Marielle Franco, the Afro-Brazilian human rights defender and city councillor, have still not been identified.

The State must investigate her execution effectively, promptly, thoroughly and impartially, and take action against those responsible, he said.

The UN expert further noted that some 20 bills are currently before the National Congress.

He urged the Government to amend three of these draft laws which, if adopted, would effectively criminalize the activities of social movements under the guise of national security and the fight against terrorism.

Special Rapporteurs and independent experts, like Mr. Voule, receive their mandates from the UN Human Rights Council, which is based in Geneva.

Mr. Voule will submit a comprehensive report to the Council in June which will outline his findings and recommendations. 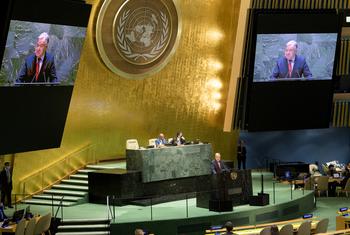 The United Nations on Tuesday remembered the horrors of the transatlantic slave trade and its continued impact on the modern world, by honouring the tradition of resistance to slavery and unity against racism, through personal stories of courage.