© UNICEF/Oleksandr Ratushniak
On 3 March 2022, a woman sits beside the stretcher of her son, who has been receiving treatment for three weeks at a hospital in Kyiv, Ukraine.

The UN rights office, OHCHR, reiterated deep concern on Friday at the increasing number of civilian casualties in Ukraine following the Russian invasion which began on 24 February, before issuing a reminder to Moscow that any targeting of non-combatants could be a war crime.

“Civilians are being killed and maimed in what appear to be indiscriminate attacks, with Russian forces using explosive weapons with wide area effects in or near populated areas,” said OHCHR spokesperson Liz Throssell, speaking in Geneva. “These include missiles, heavy artillery shells and rockets, as well as airstrikes.”

.@UNHumanRights: "Civilians are being killed and maimed in what appear to be indiscriminate attacks, with Russian forces using explosive weapons with wide area effects in or near populated areas. These include missiles, heavy artillery shells and rockets, airstrikes." #Ukraine pic.twitter.com/SDn2HMZ3bC

Fifteen days into the war, schools, hospitals and nurseries have been hit by shelling, Ms. Throssell said, adding that cluster bombs had also been used in several populated areas.

Up to midnight on 9 March, OHCHR recorded 549 civilians killed and 957 injured in Ukraine, whilst also acknowledging that that figure is likely to be considerably higher.

“On 9 March, a Russian airstrike hit Mariupol Hospital No.3, injuring at least 17 civilians. We are still investigating reports that at least three civilians may have been killed in the airstrike. We spoke to different sources in Mariupol, including local authorities, indicating consistently that the hospital was both clearly identifiable and operational when it was hit.”

The UN World Health Organization, (WHO), also condemned early reports of an attack by Russian forces on a psychiatric hospital near Kharkiv.

“There are just reports from this morning from Kharkiv, authorities that (a) psychiatric institute has been attacked. If this proves to be true, this would be yet another effect on health in Ukraine,” said Tarik Jasarevic, WHO spokesperson, speaking from Lviv in western Ukraine.

“According to these authorities, in this particular institute, there are 300 people that are staying there and then some 50 or so, who are unable to move.”

To date, the WHO has confirmed 29 attacks on health care facilities, which have resulted in 12 deaths - including two health workers - and 34 people injured.

Condemning all such targeting of civilians and civilian infrastructure, OHCHR’s Ms. Throssell issued a direct message to Moscow: “We remind the Russian authorities that directing attacks against civilians and civilian objects, as well as so-called bombardment in towns and villages and other forms of indiscriminate attacks, are prohibited under international law and may amount to war crimes.”

The war in #Ukraine is already impacting millions of lives inside AND outside the country.Food prices reached a new all-time high in February according to @FAO Food Price Index.The collateral damage? Catastrophic global hunger. pic.twitter.com/7JBKXkYhPx

With more than 2.5 million refugees from the war now sheltering across Ukraine’s borders, UN refugee agency (UNHCR) spokesperson, Matthew Saltmarsh, explained how a massive humanitarian aid operation has kicked in, inside the country.

“In Central and western Ukraine, we're still operational,” he said, speaking from Rzeszów, Poland, noting that there are now at least two million internally displaced people inside the country and an additional 12.65 million people directly affected by the conflict, who are “contending with freezing temperatures”.

The UNHCR spokesperson added that prepositioned stocks and incoming core relief items were ready for distribution in various locations across the country, including eastern regions. The UN agency has also opened warehouses in Vinnytsia, Uzhhorod and Chernivtsi, along with two in Lviv.

Caught up in fighting

Access to conflict-affected communities in cities including the stricken and besieged city of Mariupol, and Kharkiv, is “very restricted due to the ongoing military activities and increased presence of landmines, exacerbating humanitarian needs by the day”, Mr. Saltmarsh explained.

He noted that UNHCR staff on the ground were caught up in the fighting, just like the civilian population. “Food, water, medicines and medical care, shelter, basic household items, blankets, mattresses, cash, building materials, generators and fuel are urgently needed.”

Among those seeking safety away from shelling and bombing in Ukraine, some 116,000 third-country nationals have now managed to leave the country, according to UN migration agency, IOM.

“Dozens of our Member States have reached out in recent days, making requests for over 14,000 returns of third-country nationals from the neighbouring states. So, it is a huge issue,” said Paul Dillon, spokesperson for the International Organization for Migration.

The development comes as the UN World Food Programme (WFP) released alarming global food security implications because of Russia’s invasion of Ukraine, which it continues to insist on calling a “special military operation”.

According to a new WFP report, the war will likely push food and fuel prices to even higher levels, threatening vulnerable countries in particular, and the agency’s own humanitarian operations.

“The conflict comes at a time of unprecedented humanitarian needs, as a ring of fire circles the earth with climate shocks, conflict, COVID-19 and rising costs driving millions closer to starvation,” WFP said, adding that worldwide, 44 million people in 38 countries were now “teetering on the edge of famine”.

Rations have already had to be cut for refugees and other vulnerable communities across East Africa and the Middle East, including Yemen, “where 16.2 million people are food insecure and there are pockets of famine-like conditions”.

Echoing those concerns, the UN Food and Agriculture Organization (FAO) warned on Friday that international food prices had already reached an all-time high, before the Russian invasion of Ukraine sent shockwaves across international commodity markets.

This was mostly owing to existing market conditions, but also high prices of energy, fertilizers and all other agricultural services, FAO chief, Qu Dongyu, told an extraordinary meeting of agriculture ministers from the G7 group of wealthy nations.

The FAO Food Price Index mirrored this in February 2022 when it “reached a new historical record - 21 per cent above its level a year earlier, and 2.2 per cent higher than its previous peak in February 2011,” the FAO Director-General added.

“The crisis represents a challenge for food security for many countries, and especially for low-income food-import dependent countries and vulnerable population groups,” he said.

According to FAO, wheat exports by Russia and Ukraine account for about 30 per cent of the global market, while their combined sunflower oil exports represent 55 per cent.

Both countries are also prominent exporters of maize, barley and rapeseed oil and Russia is a key exporter of fertilizers - ranking as the top exporter of nitrogen fertilizers in 2020, the second leading supplier of potassium, and the third largest exporter of phosphorous fertilizer. 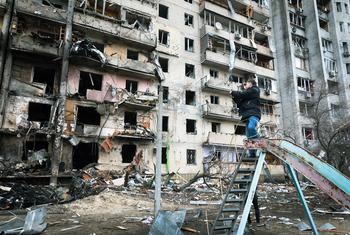 UN and partners boost presence and aid supplies inside Ukraine

Humanitarians are deploying extra staff across Ukraine to aid the growing number of civilians sheltering from Russian bombardment, or fleeing the violence, the UN Spokesperson said on Thursday.