© UNICEF/Kalungi Kabuye
COVID-19 vaccinations are being administered at a hospital in Masaka, Uganda.

The global failure to deliver enough COVID-19 vaccines to developing countries “is prolonging the pandemic” and causing tens of thousands of preventable deaths every week, senior UN figures told the Human Rights Council on Thursday.

#COVID19 "We have failed to administer the vaccines in a fair and equitable manner. This failure is prolonging the pandemic,” -- @mbachelet "We have the tools to end the acute phase of the pandemic, if we use them properly and share them fairly," -- @DrTedros #HRC49 pic.twitter.com/Q5N8eflmfW

Despite this achievement, Ms. Bachelet insisted that the “grim reality” was that only around 13 per cent of people in low-income countries have been vaccinated, compared with almost 70 per cent in high-income countries.

“We are at an inflection point in history”, he said. “We have the tools to end the acute phase of the pandemic, if we use them properly and share them fairly. But profound inequities are undermining that chance.

“Countries with high vaccination rates are reopening while others with low vaccination rates and low testing rates have been left behind. The result is more than 60,000 deaths per week, along with an increased risk of the emergence of new variants.”

And against the backdrop of the continuing Russian invasion of Ukraine, and the deadly bombardment of a paediatric hospital in Mariupol on Wednesday, Tedros expressed solidarity with Ukrainian health workers.

“In Ukraine, the health system is struggling with COVID-19 and dangerously low oxygen and medical supplies while war rages around them. WHO is delivering badly needed oxygen and other medical supplies as part of its humanitarian aid package. I reiterate that attacks on hospitals, medical personnel and medical transports are forbidden under international humanitarian law; any such attacks are grave breaches of the Geneva Conventions.”

© WHO
A health worker carries COVID-19 medical supplies in a camp for Ukrainian refugees, at the border with Moldova.

The debate at the Human Rights Council follows the forum’s landmark adoption last March of a resolution put forward by Azerbaijan and Ecuador calling for equitable, affordable and universal access to COVID-19 vaccines for all countries, at a time when other international organizations “were unable to reach consensus” on the matter, explained the Council’s President, Federico Villegas (Argentina).

Science has saved millions of lives and livelihoods. But we have failed to administer the vaccines in a fair and equitable manner. Right now, this failure is prolonging the pandemic.

“The world has been profoundly fortunate to have had effective COVID-19 vaccines developed at an unprecedented pace,” Ms. Bachelet acknowledged.

“Science has saved millions of lives and livelihoods. But we have failed to administer the vaccines in a fair and equitable manner. Right now, this failure is prolonging the pandemic.”

Crediting the UN-partnered COVAX initiative with helping the world’s poorest countries receive lifesaving COVID-19 jabs, the High Commissioner acknowledged that there had been “some recent progress” on closing the vaccine equity gap.

But she insisted that the international community needed to “accelerate these efforts by supporting COVAX to ensure timely, predictable and effective access to vaccines to all countries. We no longer have the excuse in the developed world that production constraints limit our generosity, as reports surface of tens of millions of excess vaccines expiring unused.”

The UN rights chief underscored how lack of vaccine nationalism has negatively affected the most fundamental rights of the world’s poorest people, not least their right to development.

“It exacerbates poverty and deepens inequalities”, she said of the protective practice. “Unless universal and equitable access to vaccines globally can be ensured, stockpiling of COVID-19 vaccines is not consistent with States’ human rights obligations.”

© UNICEF/Maria Wamala
COVID-19 vaccinations are being administered in communities hosting refugees, such as Fort Portal, in Uganda.

As the world endures a third year of COVID-19, greater cooperation between States is needed to stop the pandemic fast, the High Commissioner maintained.

“We stand at a crossroads. Inequality versus the right to development. Nationalism against international solidarity…Delayed vaccination may mean a lost decade for development. We risk losing an entire generation of young people to poor education and unemployment. Countries will become less resilient to fresh crises and shocks.

“And discontent at the human rights consequences of pandemic-related measures, has the potential to escalate societal tensions and violence, which are growing around the world.”

“The Coalition of Civil Society Organisations, The Tax Justice Network, in their 2021 report, stated that ‘countries are losing a total of $483 billion in tax a year through abuse by corporations and wealthy individuals’. So, it is very much a collective issue.

Ensured billions of dollars in profits for a handful of companies and have deterred the development of more localized, effective manufacturing responses that could have reached those much faster.

Ms. Waris, the Independent Expert on the effects of foreign debt and other related international financial obligations of States on the full enjoyment of all human rights, also criticised “delays in lifting intellectual property rights protections, and in the sharing of technology and know-how. This cannot be reemphasised enough times in this process. And the delays have benefited some but have been at the detriment of most.

She said they had “ensured billions of dollars in profits for a handful of companies and have deterred the development of more localized, effective manufacturing responses that could have reached those much faster.”

These and other obstacles have left key health workers unprotected from the pandemic, the independent expert insisted, despite the development of the COVID-19 vaccine within just 326 days of pandemic.

“After the successful development of vaccines in some parts of the world a few years ago, much more could have been done to ensure that health care workers and people at risk in developing countries could be swiftly vaccinated.

“And this was not done. We could have avoided the loss of thousands of lives and grave socio-economic impacts and that we yet continue to see that this is out of the reach for the majority of the world.”

On the thorny issue of sharing intellectual property rights on vaccines as a means of increasing worldwide production, the International Federation of Pharmaceutical Manufacturers and Associations (IFPMA) insisted that the situation was not so clear-cut: 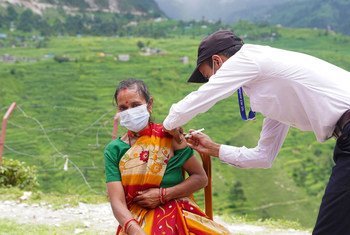 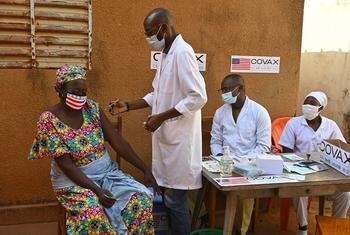 WHO warns against blanket boosters, as vaccine inequity persists

Blanket COVID-19 vaccine booster programmes could prolong the pandemic and increase inequity, the Director-General of the World Health Organization (WHO) warned on Wednesday.