© UNICEF
A displaced family in the Al-Hol camp in Syria.

Presenting the latest UN Human Rights Council-mandated report on the nearly 11-year-old conflict at a virtual press conference in Geneva, Paulo Pinheiro, Chair of the Independent International Commission of Inquiry on the Syrian Arab Republic, described the “devastating” impact on communities.

Half the country displaced

“Hundreds of thousands have been killed, more than half of the pre-war population – somewhere in the order of 22 million - have been displaced. More than 100,000 are missing or forcibly disappeared. Syria’s cities and infrastructure have been destroyed. Today the poverty rate in Syria is an unprecedented 90 percent; 14.6 million people in Syria depend on humanitarian aid.”

In Syria’s northwest, many Syrians forced from their homes “are still living in flimsy tents, stuck in snow, rain, mud,” Mr. Pinheiro continued, before insisting that “some actors seem to spend more energy on preventing aid to get to them, rather than facilitating it”.

Although parts of Syria are no longer subject to active fighting, communities remain caught between warring parties and exploited by armed actors, Mr. Pinheiro said.

He added: “Make no mistake that violence against civilians continues across the country, from bombardment in the northwest, north and northeast, to targeted killings, unlawful detention and torture…These are the abysses faced by the Syrian people.”

According to the report, covering the period July to December 2021, there were increased bombardments in the northwest of the country and skirmishes between the Turkish-backed Syrian National Army (SNA) and the Syrian Democratic Forces in the northeast.

The Commission documented “grave violations of fundamental human rights and international humanitarian law by parties to the conflict, including war crimes and ongoing patterns of crimes against humanity.

“In Idlib and western Aleppo in the northwest, residential areas were also shelled indiscriminately from the ground by pro-government forces.”

Previous reports by the Commission of Inquiry have warned about a worsening humanitarian situation across Syria because of fighting and insecurity, but Russia’s invasion of Ukraine on 24 February has heightened concerns that critical wheat imports may now be affected, said Commissioner Hanny Megally: “We’re already seeing inflation at 140 per cent at the beginning of this year (and) it’s gone up.

“We’re seeing the State already beginning to ration. We’re seeing the prices of commodities, basic commodities and fuel going up…Most of Syria’s imported wheat is coming from Ukraine or Russia, so we are very concerned that the war in Ukraine will have a bad impact on Syria.”

With Syria “teetering on collapse”, the Commissioners urged a review of sanctions imposed on Syria on a country-by-country basis.

“Sanctions …should facilitate humanitarian assistance (but) this is not really working very well,” said Mr. Megally, who warned that many countries were so fearful of breaching the embargoes that they were practising “overcompliance”, leaving Syrian communities short of essential commodities.

Findings from the latest report from the Commission of Inquiry include 14 attacks “by Syrian and Russian forces in northwest Syria”, Mr. Pinheiro said.

“Over these past few months, scores of children were killed, including on their way to school; and the last functional medical centre in Jabal al Zawiya was rendered inoperable.”

Longstanding concerns also remain over the detention in Al Hol camp of tens of thousands of women and children, believed to be the families of former ISIL fighters, in Syria’s northeast.

“The conditions in Al Hol are absolutely appalling, and the number of children and other numbers of mostly women who are detained-cum-interned there,” said Commissioner Lynn Welchman of the notorious camp complex in Syria’s northeast.

“It’s a dreadful situation, humanitarian-wise and security-wise. And it’s one of the things that we are most concerned about in terms of what’s happened…In some cases, it could at least be addressed by third nations who are able to take back their nationals, with their children.”

The Commission of Inquiry has repeatedly called for UN Member States to repatriate nationals who went to participate in the Syrian conflict.

“The camp residents are under constant risk of being injured, killed, or trafficked. More than 90 murders and 40 attempted murders have occurred in Al Hol alone in the past year,” said Mr. Pinheiro. “We are repeating our call for Member States to bring home their women and children from the camps.” 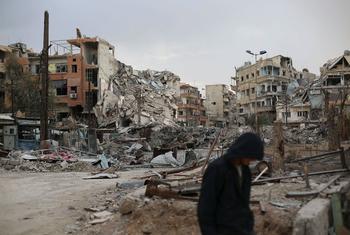 As the Syrian war has driven poverty and hunger to levels higher than at any previous point, UN Special Envoy Geir Pedersen told the Security Council on Friday that he would continue to focus on engaging the parties to bring an end to the protracted conflict. 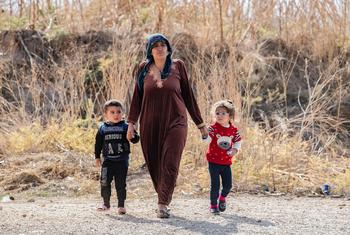 Boys and girls caught up in intense fighting which raged for six days around a besieged prison in northeast Syria, need protection and assistance, the UN children’s agency, UNICEF, said on Thursday.