© UNICEF/Omar Haj Kadour
In Binnish in the Syrian Arab Republic, internally displaced people from Idlib live in a destroyed school while a tanker provides them with water that children transport with small containers.

At least 92 people have been killed in northeastern and northwestern Syria in the weeks following 9 October, when Turkish forces invaded Kurdish-held border areas in the northeast, according to the UN human rights office (OHCHR).

Noting that victims had come under fire from airstrikes and ground-based strikes, he added that people are increasingly being targeted by the “indiscriminate use of improvised explosive devices (IEDs) in populated areas, including in local markets”.

The development comes as the UN Special Envoy for Syria announced that the Co-Chairs of Syrian-owned talks to decide a foundational text for the people of the war-torn country, had agreed to resume their discussions in Geneva on Monday, 25 November.

“They have started to listen to each other very seriously,” Geir Pedersen told journalists in the Swiss city, at the end of the second week of talks by the Syrian Constitutional Committee. “Of course, these are sometimes very painful discussions and it takes courage to sit and listen to the other side presenting its views on these issues. But I think they have begun to address both difficult and painful issues and I think it is fair to say that the discussions have been very professional.”

On Thursday, Najat Rochdi, Senior Humanitarian Adviser to the United Nations Special Envoy for Syria, warned that hundreds of thousands of people in northeast Syria have been left vulnerable following the Turkish military incursion.

“Of the more than 200,000 people who fled the fighting in recent weeks, close to 100,000 people have not yet been able to return home and are dispersed across improvised camps and collective shelters,” she said in a statement.

These recent displacements have compounded an already dire situation in which 710,000 people were already displaced, and approximately 1.8 million people are in need of humanitarian assistance, Ms. Rochdi’s statement explained.

In a related warning, Mr. Colville said that people recently displaced during the military offensive have been “subsequently…subjected to arbitrary detention, in addition to enforced disappearances, after returning to their homes. This is occurring both in areas controlled by Turkish forces and Turkish-affiliated armed groups and in areas controlled by Kurdish armed groups.”

The OHCHR spokesperson added that attacks using improvised explosive devices in the formerly Kurdish-controlled north-east “have noticeably escalated in recent days, mainly in areas under the control of Turkish-affiliated armed groups, which suggests they have most likely been carried out by groups opposing the Turkish military offensive”.

In Syria’s northwest, meanwhile, medical professionals continue to be at grave risk.

Health facilities “continue to be directly hit or significantly damaged whenever there is a military escalation in Idlib”, OHCHR’s Mr. Colville said.

"Civilians continue to pay a very high price in the ongoing hostilities in #Syria. Health facilities continue to be directly hit," - @UNHumanRights "Funding shortfalls represent the most serious obstacle we face in reaching children who need help urgently,” - @UNICEF. pic.twitter.com/NZvK2Tc4bA

Just this week, “four separate facilities were damaged”, he noted, taking the total number of health facilities that OHCHR has recorded being hit since 29 April to 61.

“We can’t determine if every single attack is deliberate,” Mr. Colville added, “but the large scale of these attacks – as I say, 61 separate facilities, considerably more actual strikes hitting those facilities, given some of them were hit two, three, four times, and the fact that it’s happening every time there’s a military escalation strongly suggests that Government-affiliated forces are conducting these strikes are at least partly if not always deliberately striking health facilities. But I think we’ll have to…and of course, that would amount to a war crime.”

In a new development related to thousands of Syrians held by the Government, Mr. Colville explained that it was concerning that families have been receiving death notifications from the Government authorities.

“Basically telling them that their relatives, or family members who were detained or forcibly disappeared have died in custody.”

“Of the $295 million we required in 2019, we have received just $138 million,” said Marixie Mercado, spokesperson, UN Children’s Fund (UNICEF): “Despite the massive security, access and capacity challenges, this funding shortfall now represents the most serious obstacle we face in reaching children who need help urgently.”

Listing the many urgent interventions that would no longer be possible without that funding, Ms. Mercado explained that it would mean “not providing emergency water, sanitation and hygiene support to over 100,000 people, nor improving poor water supplies to 300,000 more. Not providing 55,000 children with routine immunization, and nearly 140,000 women and children with health and nutrition consultations.”

According to OCHA, the UN humanitarian coordinating office, the overall UN appeal requires nearly $3.3 billion but is only 52 per cent funded. 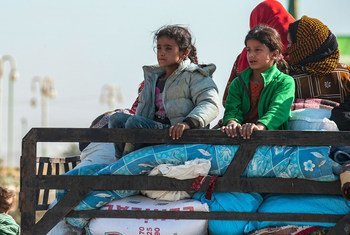 The head of the UN Children’s Fund (UNICEF) is appealing for countries to repatriate scores of foreign children who are stranded in northeast Syria in the wake of the Turkish-launched offensive which began last month. 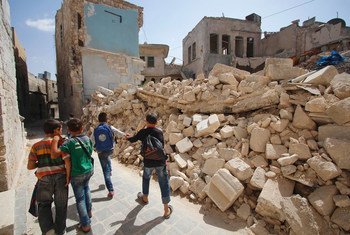