© UNICEF/Anton Skyba for The Globe and Mail
On 25 February 2022 in Kyiv, Ukraine, a man calls relatives, standing in front of an apartment building heavily damaged during the ongoing Russian invasion.

On day 13 of Russia’s invasion of Ukraine, and amid rising numbers of civilian casualties, UN rights chief Michelle Bachelet on Tuesday repeated her ceasefire call, with humanitarians on the ground describing conditions as increasingly “apocalyptic”.

Addressing the Human Rights Council, Ms. Bachelet said that since Russia began its offensive on 24 February, at least 1,335 civilians have been confirmed wounded or killed - 474 killed and 861 injured.

The true number is likely to be much higher, given the type of weapons employed across Ukraine by Russian forces, said the High Commissioner’s Office, OHCHR.

“Most of the civilian casualties are from airstrikes and explosive weapons used by Russian forces with wide area effects, including heavy artillery and multiple launch rocket systems,” said Liz Throssell, OHCHR spokesperson. “As a result, hundreds of residential buildings in many cities, including Chernihiv, Kharkiv, Kherson, Mariupol and Kyiv have been damaged and destroyed.”

Amid continued shelling and use of multiple rocket launch systems on Ukrainian cities, the UN humanitarian coordinating office, OCHA, reiterated the need to urgently establish a working system to ensure safe passage to get civilians out, and aid workers in.

“You need to have clarity on the route. It needs to be a route which is safe. You need to have timing for movements,” said Jens Laerke, OCHA spokesperson, speaking at a scheduled briefing in Geneva.

Ongoing UN-led efforts with both sides have continued, to help facilitate safe passage for civilians and supplies, Mr. Laerke continued.

“OCHA now has a team in place since yesterday in Moscow, to liaise with the authorities there, including with the Minister of Defence, to bring the system of deconfliction forward. They met for the first time yesterday and they're meeting again today.”

© UNICEF/Viktor Moskaliuk
On 5 March 2022 in western Ukraine, children and families make their way to the border to cross into Poland.

Nearly two weeks into the Russian invasion, the situation for millions of civilians inside Ukraine continues to worsen.

“This situation is really apocalyptic for people, it is getting worse, they are running out of essential supplies,” said Ewan Watson, spokesperson for the International Committee of the Red Cross (ICRC). “And so, our call today is really for lifesaving aid to reach these people.”

He added: “We've depleted our stocks, as I said; it stands to reason that people are coming to the end of whatever supplies they had. So, when you ask if this is a matter of life or death, or if it is lifesaving? Yes. For us, it is essential that humanitarian aid gets into a city like Mariupol, and to other cities that are in the midst of conflict in Ukraine today.”

The situation also remains dire for all those in need of healthcare in areas subjected to shelling, warned the UN health agency’s Tarik Jasarevic, speaking from Lviv in western Ukraine.

Sixteen attacks on health facilities have now been verified by the World Health Organization (WHO), claiming nine lives and injuring 16 - some of them health workers.

“These attacks are a violation of international humanitarian law,” Mr. Jasarevic said, as he echoed calls for all such attacks to stop.

“I talked to this morning to a doctor in Lviv, who was in contact with her colleagues in eastern part of the country, and they were saying that it's very difficult for patients to access healthcare facilities in these areas, not only because of security, but also because of damaged infrastructure.”

Latest data from the UN migration agency (IOM) indicates no let-up in the number of people fleeing the violence across Ukraine’s borders.

“More than two million people have fled Ukraine to neighbouring states as a result of the ongoing war in that country,” said Paul Dillon, IOM spokesperson. “Among them are 103,000 third-country nationals from dozens of countries.” 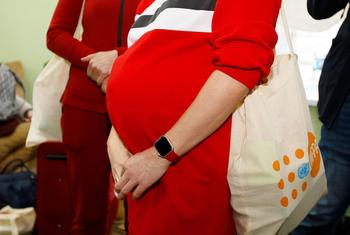 Mariia Shostak, a 25-year-old woman living in the Ukrainian capital Kyiv, started having contractions on 24 February, the day the Russian Federation launched a military offensive in Ukraine, and gave birth amid the sounds of air raid sirens. 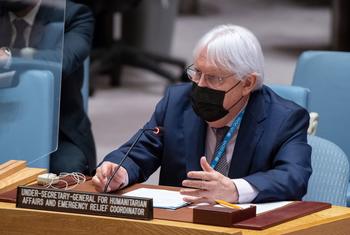 Allowing civilians to safely leave areas under fire in Ukraine, and delivering desperately needed aid to these locations, are among immediate priorities for humanitarians, the UN Emergency Relief Coordinator, Martin Griffiths, told the Security Council on Monday.