Well over 600,000 people have fled Ukraine in under a week, since Russia’s military offensive began, UN humanitarians said on Tuesday, as they issued an appeal to protect civilians from further bloodshed.

“We know that children have been killed, we know that thousands and thousands are at risk, and we know that more children, gutwrenchingly, are going to die or be injured in this unless fighting ends,” said UN Children’s Fund (UNICEF) spokesperson James Elder.

Between 24 Feb and midnight last night, @UNHumanRights recorded 536 civilian casualties in #Ukraine 🇺🇦. These include 136 civilians killed, of whom 13 were children + 400 civilians injured, incl. 26 children. "We stress the urgent need for an immediate cessation of hostilities." pic.twitter.com/FVRQjwAwZA

Speaking over his mobile phone from western Ukraine, where an exodus of families, students and migrants have been making their way westwards towards Poland, among other neighbouring countries, Mr. Elder said that the military escalation that has been reported across several Ukrainian cities would result in more children being separated from their families. “We’re going to see more fathers handing children across to border guards in Poland,” he added.

Needs remain high within Ukraine, in areas most affected by the violence, Mr. Elder insisted, as widely relayed images showed what appeared to be a Russian military convoy approaching Kiev, stretching back some 60 kilometres.

The World Food Programme (WFP) said on Tuesday it was launching a three-month emergency operation in Ukraine to provide food assistance for people fleeing the conflict.

The agency is scaling up to reach up to 3.1 million civilians through the use of cash-based transfers as well as in-kind food distributions if required.

WFP staff in the capital Kyiv say that food supplies are running low, with grocery store shelves almost empty. The agency plans to provide assistance through in-kind food distributions, multi-purpose cash, and food vouchers that can be used in selected shops.

The first shipments of 400 tons of immediate response rations are on their way from Turkey to the Romanian and Polish border crossings with Ukraine.

Some 200 tons are being sent to each location and are expected to arrive by end of week. This usually takes the form of ready-to-eat meals that do not require lots of preparation, including tinned foods and buckwheat.

Support at the borders

The development came as the UN agency’s Executive Director, Catherine Russell, said that children had been killed and injured, citing reports that “hospitals, schools, water and sanitation facilities and orphanages had come under fire”, with explosive weapons being used in residential areas.

According to the UN migration agency (IOM) and UN refugee agency (UNHCR), well over 600,000 have already fled the deadly and deteriorating situation inside Ukraine.

“As you know the numbers are exponentially increasing, we have now over 660,000 refugees who have fled Ukraine in last six days alone,” said UNHCR spokesperson Shabia Mantoo.

© UNICEF/Constantin Velixar
A refugee child from Ukraine stands with her dog at a temporary refugee centre near the Palanca crossing point on the border of the Republic of Moldova and Ukraine, on 26 February 2022.

“At this rate, the situation looks set to become Europe’s largest refugee crisis this century and UNHCR is mobilising resources to respond as quickly and as effectively as possible.”

Echoing that message, IOM spokesperson Safa Msehli, noted that there were also an estimated “470,000 third-country nationals in Ukraine”, including a large number of overseas students and migrants working in the country.

Many remain stranded inside Ukraine, although at least 6,000 third-country nationals have arrived in Moldova and Slovakia alone, Ms. Msehli said.

She noted that several States had requested the UN agency’s assistance to help with the return of their citizens to Africa, the Middle East and Asia.

“More than 50 Tunisian nationals who crossed into Moldova are being assisted by IOM to relocate to Romania before they return home through a charter flight, in coordination with relevant authorities,” Ms. Msehli added.

Highlighting concerns that hospitals, health workers and sick people have been targeted in the Russian “offensive”, the World Health Organization (WHO) insisted on the sanctity of civilians and civilian infrastructure.

"We are concerned about reports on attacks on health. We have received several unconfirmed reports of attacks on hospitals and health infrastructure, but only the attack on 24 February has been verified,” said Christian Lindmeier, WHO spokesperson.

Since the start of the hostilities on 24 February and midnight on 1 March, the UN rights office, OHCHR, has confirmed 536 civilian casualties across Ukraine, including 136 civilians killed, of whom 13 were children.

© UNICEF/Oleksandr Brynza
A baby is cared for in a makeshift perinatal centre located in the basement of a medical complex in Saltivka, a residential district in Kharkiv, Ukraine.

Since the start of the hostilities on 24 February, the UN rights office, OHCHR, has confirmed 536 civilian casualties across Ukraine, including 136 civilians killed, including 13 children.

“Most of these casualties were caused by the use of explosive weapons with a wide impact area”, said OHCHR spokesperson Liz Throssell. “This includes shelling from heavy artillery and multiple launch rocket systems and airstrikes.”

Away from the violence and bloodshed, solidarity from “everyday Ukrainians” with most of the newly displaced has been “extraordinary”, UNICEF’s Mr. Elder reported.

“I’ve seen grandmothers cooking food in the road, I see people offering a bed to those at the train station, I’ve seen teenage girls making cookies and knocking on car doors offering them to people who’ve come and spent three days covering the 500 kilometres from Kiev.”

Nonetheless, UN officials have condemned reports that many foreign students from Africa and migrants living and working in Ukraine have been mistreated and abused by officials while trying to join the exodus.

“Discrimination and racism are absolute wrongs and the High Commissioner (of Human Rights) and our Office have been very vocal in calling this out,” said Liz Throssell, spokesperson for the human rights office, OHCHR.

“With regard to the situation that may be happening on the borders, that is clearly something to be monitored,” she said. “But I think the call would be that everyone should be allowed to enter (a foreign country) without discrimination based on race or ethnicity.” 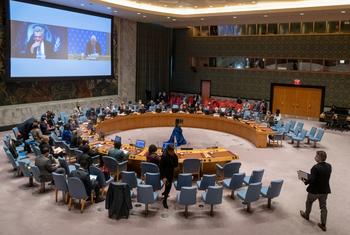 After three days of intense clashes across areas in parts of Ukraine, the number of civilian casualties and damage to critical infrastructure are growing, and the United Nations and its relief partners are working day and night to care for the injured, the Security Council heard on Monday during an urgent meeting on the humanitarian situation in the country. 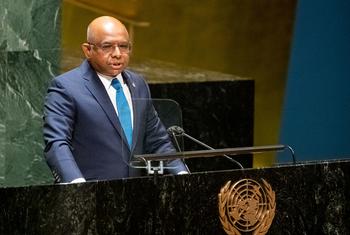