Danish Red Cross/Jakob Dall
A woman stands in the middle of what used to be her rose garden in Ukraine. (file)

Amid reports on Thursday that people were fleeing en masse from the Ukrainian capital of Kiev following Russia’s so-called “special military operation,” UN humanitarians warned of the “devastating” consequences of military action.

“There are no winners in war, but countless lives will be torn apart,” said Filippo Grandi, head of the UN refugee agency, UNHCR.

Civilian lives and infrastructure “must be protected and safeguarded at all times, in line with international humanitarian law”, Mr. Grandi continued, adding that the UN is working with Ukrainian authorities and partners to provide humanitarian assistance “wherever necessary and possible”.

“To that effect, security and access for humanitarian efforts must be guaranteed,” he added.

There are no winners in war, but countless lives will be torn apart – UN refugee chief

Since 2015, UNHCR has delivered 141 humanitarian convoys to non-Government-controlled areas in eastern Ukraine.

Underscoring the UN’s solidarity with the people of Ukraine, the top UN humanitarian official in the country, Osnat Lubrani, insisted that the Organization and aid partners “are committed to staying and delivering. We are here to support the people exhausted by years of conflict and we are prepared to respond in case of any increase in humanitarian needs.”

UNICEF echoes the appeal of the @UN Secretary-General for an immediate cease-fire and calls on all parties to respect their international obligations to protect children from harm. pic.twitter.com/G3MuhIKZVv

Echoing that message, the UN Children’s Fund (UNICEF) said that it was also deeply concerned for the “lives and wellbeing” of Ukraine’s 7.5 million children.

UNICEF chief Catherine Russell noted that “heavy weapons fire” along the contact line in the east of the country had already damaged critical water infrastructure and education facilities in recent days.

“Unless the fighting subsides, tens of thousands of families could be forcibly displaced, dramatically escalating humanitarian needs,” Ms. Russell warned, adding that “the past eight years of conflict have inflicted profound and lasting damage to children on both sides of the line of contact”.

Meanwhile, UNICEF continues to provide psychosocial care to those children who have been traumatized by chronic insecurity.

It is also increasing large-scale, life-saving programmes, including by trucking safe water to conflict-affected areas; prepositioning health, hygiene and emergency education supplies as close as possible to communities near the line of contact; and working with municipalities to ensure immediate help for children and families in need.

“President Putin, stop your troops from attacking Ukraine, give peace a chance,” Mr. Guterres said, at the start of an emergency meeting of the Council – its second late-night session in a week.

That appeal came after speakers took the floor at the 193-member General Assembly to denounce Russia’s actions towards Ukraine and appeal for diplomacy.

“Let’s give peace all the chance it deserves,” said UN General Assembly President Abdulla Shahid, hours after Secretary-General António Guterres had warned that “the entire international system” was being tested by the Ukraine crisis. 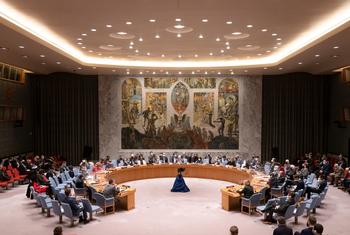 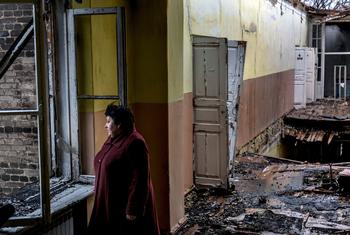